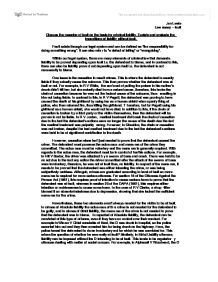 Discuss the meaning of fault on the basis for criminal liability. Explain and evaluate the impositions of liability without fault.

Discuss the meaning of fault on the basis for criminal liability. Explain and evaluate the impositions of liability without fault. Fault exists through our legal system and can be defined as "the responsibility for doing something wrong". It can also refer to "a defect of failing" or "wrongdoing". Within our legal system, there are many elements of criminal law that demands liability to be proved depending upon fault i.e. the defendant to blame, and in contrast to this, there can also be liability proved not depending upon fault i.e. the defendant is not necessarily to blame. One issue is the causation in result crimes. This is where the defendant is usually liable if they actually cause the outcome. This then proves whether the defendant was at fault or not. For example, in R V White, the son's act of putting the poison in his mother's drunk didn't kill her, but she actually died from a natural cause, therefore, this broke the chain of causation because he was not the factual cause of the outcome, thus resulting in him not being liable. In contrast to this, in R V Pagett, the defendant was proving to have caused the death of his girlfriend by using her as a human shield when openly firing at police, who then returned fire, thus killing the girlfriend. Therefore, but for Pagett using his girlfriend as a human shield, she would not have died. In addition to this, if the chain of causation is broken by a third party or the victim themselves, then the defendant will be proven to not be liable. ...read more.

The Court of Appeal allowed the defence of duress due to the fact the men were escaping death from Iraq. Similarly, partial defences for murder allow reduction to manslaughter i.e. diminished responsibility and provocation. The defendant however, does not escape liability altogether. For example, in Byrne, the D strangled a woman and mutilated her body. Evidence showed he was a s****l psychopath with little control over his actions. It was decided he possessed an abnormality of mind which reduced the responsibility of his behaviour with the use of diminished responsibility. In respect of murder, this brings up the sentencing issue in respect of good motives. Sentencing generally has aggravating and mitigating factors that reflect different levels of fault of the D's, so this then affects the sentence pass. For example, two offenders may have different backgrounds being sentenced for the same offence. Both receive different length of sentences. However, the mandatory life sentence is given to those that kill, therefore, the sentence of life is given to mercy killers and serial killers. A mercy kill is someone who kills for a different reason i.e. out of love. In R V Inglis (2011) a mother was given the mandatory life sentence for murdering her terminally ill son. This same sentence was also given to the serial killer Ian Huntley, who murdered two 10 year old girls, with no real proven reason behind it. This brings up the question of whether Mrs Inglis was at fault and deserving of the punishment Ian Huntley received. ...read more.

As in Rose V Plenty, where a milkman was explicitly forbidden to take a 13 year old with him to help him on his mil rounds, but he still did, and as a result, the child was injured through his negligence. Finally, whether justice is served can be taken into account. Is it wrong to punish someone who is blameless or to impose liability on someone who has taken care to prevent the undesired outcome? Most would argue yes, due to the fact we all link fault to our idea of justice and fairness. Conviction of someone who is blameless spreads a lack of confidence in our legal system. People who are deprived of their freedom when they are guiltless is not making it a fair society such as in R V Storkwain, a pharmacist victim of fraud was convicted of supplying prescription drugs. Other things to take into consideration are the consequences of a blameless person being convicted. That person would receive a barrier to employment due to the criminal record they receive, a sanction by the court, society's condemnation and a tarnished reputation. Is this really fair for someone that wasn't at fault? Similarly, the consequence on society is the fact that people who are convicted, cannot avoid re-offending no matter how much care or thought they apply. In conclusion, within the legal system today, it appears that there are many impositions of liaiblty without fault and it would be are to eradicate them, due to the pros and cons of the topic. ?? ?? ?? ?? Jan Lewis Law essay - fault ...read more.