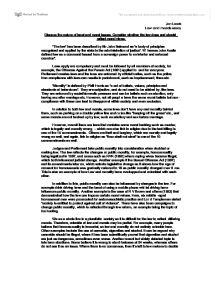 Discuss the nature of legal and moral issues. Consider whether the law does and should reflect moral views

Discuss the nature of legal and moral issues. Consider whether the law does and should reflect moral views. "The law" has been described by Sir John Salmond as "a body of principles recognised and applied by the state in the administration of justice". Whereas John Austin defined law as a command issued from a sovereign power to an inferior and enforced coercion". Laws apply are compulsory and must be followed by all members of society, for example, the Offences Against the Person Act (1861) applied to and for everyone. Parliament creates laws and the laws are enforced by official bodies, such as the police. Non-compliance with laws can results in punishment, such as imprisonment, fines etc. "Morality" is defined by Phill Harris as "s set of beliefs, values, principles and standards of behaviours". They are subjective, and do not need to be abided by, like laws. They are enforced by social/domestic pressure and can be beliefs such as abortion, only having sex after marriage etc. However, not all people have the same moral beliefs but non-compliance with these can lead to disapproval within society and even exclusion. In relation to both law and morals, some laws don't have any real morality behind them, such as parking on a double yellow line and rules like "keeping off the grass" etc., and some morals are not backed up by law, such as adultery and sex before marriage. However, overall there are laws that contains some moral backing such as murder, which is legally and morally wrong - which can also link to religion due to the fact killing is one of the 10 commandments. ...read more.

There are two different theories with regards to law; the natural law theory and the positive theory. These are linked to the characteristics of laws and the theorists explain their views on whether laws which conflict with moral rules should be valid. The Natural law theory argues that law must be in accordance with a higher moral code to be valid. If it is not moral, then that law is not valid. Natural law theorists believe that the validity of a law depends upon it's compatibility with a high moral authority. St Thomas Aquinas and the Greek philosopher Aristotle believed natural law to be the eternal law implanted by God as part of human nature. We therefore have, for example, a natural law inclination to preserve life and procreate. This divine law is revealed to mankind in various religious codes, for example, the Ten Commandments. Another natural law theorist, Lon Fuller, believed the natural law was earth based. To be valid, a law had to conform to an inner morality and comply with eight principles, including being prospective and possible for people to obey. On the other hand, the positivist theory believes that a law that is made in a manner recognised by the sovereign power of the state is valid, irrespective to its content. One legal positivist, Jeremy Bentham actually rejected natural law by referring to it as 'nonsense on stilts'. John Austin and HLA Hart explain the positivist theory differently. John Austin said 'The existence of law is one thing, it's merit or demerit is another. ...read more.

The law also does reflect Hart's view. The case of Gillick V West Norfolk concerned the prescription of contraception to children under the age of 16 without parental consent. It was argued that if a person can understand the issues of contraceptive treatment, a third party should not have the right to interfere. Another example is in December 2000 where the age of consent for homosexuals was reduced from 18 to 16. The decision was made as the rights of homosexuals are increasing to be seen in the Civil Partnership Act (2004) which allows couples of the same sex to be recognised as having the same rights and equal treatment as married couples in a range of areas (e.g. employment). There are also some issues that are still open for debate but are slightly changing. Such as the Diane Pretty Case (2001) which brought up issues about euthanasia. Although he law still does not aloe this, it is an issue which is constantly under discussion due to the controversial nature and its moral implications. In conclusion to everything discussed, it is apparent that there are many different views of the link between the issues of law and morality, and whether they should be treated separately. Although there are some laws which do not contain a moral or some moral backing, it is sure that the majority of laws contain moral implications. Whether these laws should reflect moral views, is a topic that is still open for further debate due to the fact the question of laws reflecting the morality of the public remains unanswered. ?? ?? ?? ?? Jan Lewis Law and morals essay ...read more.