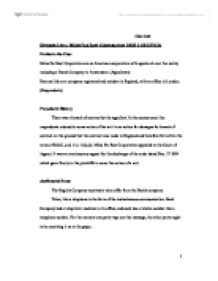 Case note ENTORES LTD V. MILES FAR EAST CORPORATION [1955] 2 QB 327(CA) Parties to the Case Miles Far East Corporation are an American corporation with agents all over the world, including a Dutch Company in Amsterdam. (Appellants) Entores Ltd are a company registered and resident in England, with an office in London. (Respondents) Procedural History There was a breach of contract by the appellant. In the county court the respondents ordered to serve notice of the writ in an action for damages for breach of contract on the ground that the contract was made in England and therefore fell within the terms of R.S.C.,ord. 11,r 1 (e),(i). Miles Far East Corporation appealed to the Court of Appeal. It was an interlocutory appeal for the discharge of the order dated Dec. 17 1954 which gave liberty to the plaintiffs to serve the notice of a writ. chaMaterial Facts The English Company received a telex offer from the Dutch company. Telex, like a telephone is the form of the instantaneous communication. Each Company had a teleprinter machine in its office; and each has a teletex number like a telephone number. For the moment one party type out the message, the other party ought to be receiving it on to the paper. ...read more.

Wrench (1840) 3 Beav. 334.] or revoked, [Watson v. Davies, ante.] and knowledge of the revocation has been communicated to the offeree. [Henthorn v. Fraser [1892] 2 Ch. 27.] Where an offer is capable of being accepted by post, the time of acceptance is generally the time at which the acceptance is posted. [Adams v. Lindsell (1818) 1 B. & Ald. 681.] This is so even though the posted acceptance never arrives at its destination. [Household Fire and Carriage Insurance Co. v. Grant (1879) 4 Ex. D. 216.] This rule does not apply to the revocation of an offer, which must be actually communicated to the offeree. [Henthorn v. Fraser [1892] 2 Ch. 27.] Furthermore, the rule may be negatived by express words. So where an option was required to be exercised "by notice" it was held that a notice meant something which came to the attention of the person to whom it was addressed, so that the "posting rule" did not apply. [Holwell Securities v. Hughes [1974] 1 W.L.R. 155.] The "posting rule" does not apply to instantaneous communications between the parties, e.g. telex, [Entores v. Miles Far East Corporation [1955] 2 Q.B. 327.] or, presumably, facsimile transmission. ...read more.

They apply to contracts by post as well as instantaneous communications. Even thought, in the United States of America the instantaneous communication are treated as postal communications there is no difference between English and American Law: see American restatement S.64, in the case of the contract of the telephone, it has been held in America that the contract is made at the place where the acceptance is spoken, therefore dealing with such a contract the same principal as that applicable in the case of a letter to telegram. Lord Parker made a number of general comments in his judgment which could be seen as obiter dictum: 'The requirement as to actual notification of the acceptance is for the benefit of the offeror, he may waive it and agree to substitution for that requirement of some other conduct by the acceptor. He may do so expressly, as in the advertisement cases, by intimating that he is content with the performance of a condition. Again, he may do so impliedly by indicating a contemplated method of acceptance, for example, by postal telegram. In such a case he does not expressly dispense with actual notification, but he is held to have done so impliedly on grounds of expediency'. 1 1B &Ald.681 2)1 H.L.C 381 3 (1872)L.R.7Ch.587 4 (1871)L.R.6Exch.108 5 (1879)4Ex.D.216 6 (1892)2Ch.27,32; 8 T.L.B. 459 7 (1870)L.R. 6Exch. 7. 8 (1888)20 Q.B.D. 640 9 (1904)1Ch.305; 20T.L.R. 125 1 ...read more.