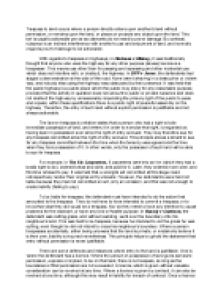 Entry to anothers land without permission is never justifiable and is always actionable per se. Discuss the above view of the tort of trespass to land.

﻿Trespass to land occurs where a person directly enters upon another's land without permission, or remains upon the land, or places or projects any object upon the land. This tort is usually actionable per se as claimants do not need to prove damage. By contrast, nuisance is an indirect interference with another's use and enjoyment of land, and normally requires proof of damage to be actionable. With regards to trespass on highways, in Hickman v Maisey, it was traditionally thought that anyone who uses the highway for any other purpose (abuse) becomes a trespasser. This means use other than for passing and repassing and other incidental use which does not interfere with, or obstruct, the highway. In DPP v Jones, the defendants had staged a demonstration at the side of the road. None were behaving in a destructive or violent way, and nobody else using the highway was obstructed by their presence. It was held that the public highway is a public place which the public may enjoy for any reasonable purpose, provided that the activity in question does not amount to public or private nuisance and does not ...read more.

Later, they ordered more wine, and this time refused to pay. It was held that a wrongful act committed at this stage could retrospectively render their original entry unlawful. However, the defendants were held not liable because they had not committed an act, only an omission, and this was not enough to create liability (failing to pay). To be liable for trespass, the defendant must have intended to do the action that amounted to the trespass. They do not have to have intended to commit a trespass, or to know that what they did would be a trespass. Nor do they need to have any intention to cause problems for the claimant, or have any kind of hostile purpose. In Basely v Clarkson, the defendant was cutting grass, and without realizing, went over the boundary onto his neighbour?s land. This was held to be trespass, because he intended to cut the grass he was cutting, even though he did not intend to cross his neighbour?s boundary. Where a person trespasses accidentally, either being unaware that the land is private, or mistakenly believe it is their own, liability is incurred nevertheless. ...read more.

In such circumstances, trespass to land may be justifiable and would not be actionable. If an action for trespass to land is successfully brought, plaintiff may be able to ask for damages. If there is damage suffered by the claimant, substantial damages may be given to compensate the claimant. This would include profits taken by defendant during the occupation- so long as it is deemed reasonable. There are some instances when injunctions are a more suitable remedy. They are a prohibition in order to allow the claimant to enjoy use of their land. Injunctions are granted at the discretion of the court and can be used to prevent threatened or repeated breaches. In cases where trespassers refuse to leave, landowners may use reasonable force to expel trespassers. However, this is not encouraged as it may amount to breach of peace. Squatters, for example, whose presence is continuous and threatens to be permanent, an action for recovery for land could be brought against them. Police are given powers under the Criminal Justice and Public Order Act 1984 to remove such persons. ...read more.