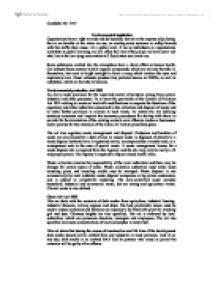 Environmental legislation Organisations have a right to trade and do business, but not at the expense of polluting the air we breathe or the water we use, or creating noise nuisance or safety hazards with the traffic they cause. At a global level, if we as individuals or organisations contribute to global warming, we will affect the lives of the people we have never met who live in the low lying areas which will flood when sea levels rise. Some substances emitted into the atmosphere have a direct effect on human health. Car exhaust fumes contain volatile organic compounds, which are not only harmful in themselves, but react in bright sunlight to form a smog which irritates the eyes and respiratory tract. Diesel exhausts produce tiny particles known as PM10s, as well as aldeyhdes, which are harmful to humans. Environmental protection Act 1990 An Act to make provision for the improved control of pollution arising from certain industrial and other processes. ...read more.

Waste collection remains the responsibility of the local authorities and there may be charges for certain types of waste. Waste collection authorities must make waste recycling plans, and recycling credits may be arranged. Waste disposal is run commercially by local authority waste disposal companies or by private contractors, and is subject to competitive tendering. The term-controlled waste includes household, industrial and commercial waste, but not mining and agricultural waste. Clinical waste is also defined. Clean Air Act 1993 This act deals with the emission of dark smoke from agriculture, industrial burning, industrial furnaces, railway engines and ships. The best practicable means must be used to reduce emissions and furnaces are required to be fitted with plant for arresting grit and dust. Chimney heights are also specified. The act is enforced by local authorities, which can prosecute directors, managers and employees. The act also specifies maximum concentrations of lead and sulphur in motor fuel. This act states that during the course of construction and life time of the development dark smoke should not be emitted from any industrial or trade premises. ...read more.

The Water Resources Act 1991 controls the duties and powers of the Environment Agency in England and Wales in water management, abstraction and drought. The act also established statutory water quality objectives for rivers and complete catchment systems. The Water Industry Act 1991 sets out the duties of water companies in England and Wales in the supply of water, in the provision of sewerage services, and in the provision and variation of consents for the discharge of trade effluent into the public sewer. The act also authorises the charging schemes for the acceptance and treatment of trade effluent. Planing Act and planning regulations This act requires a local authority to assess the environmental effects of development projects, and to consult the Environment Agency before granting planning permission. Before the borough of hillingdon could give BAA permission to go ahead with the development, they contacted the Environmental Agency who assessed the environmental impact both short and long-term. BAA was given the go ahead with certain conditions i.e. relocation of habitants & investing in environmental protection. Candidate No: 1541 ...read more.