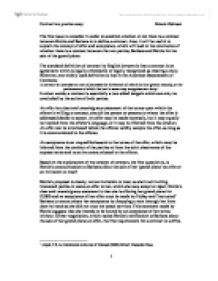 Establish whether or not there is a contract between Hettie and Barbara.

The first issue to consider in order to establish whether or not there is a contract between Hettie and Barbara is to define a contract. Also, it will be useful to explain the concept of offer and acceptance, which will lead to the conclusion of whether there is a contract between the two parties, Barbara and Hettie for the sale of the grand piano. The standard definition of contract by English lawyers is that a contract is an agreement which is legally enforceable or legally recognized as creating a duty. However, one widely used definition is that in the American Restatement of Contracts: A contract is a promise or a set of promises for the breach of which the law gives a remedy, or the performance of which the law in some way recognises as a duty.1 In other words, a contract is essentially a two-sided bargain which can only be concluded by the action of both parties. An offer is a clear and unambiguous statement of the terms upon which the offeror is willing to contract, should the person or persons to whom the offer is addressed decide to accept. An offer may be made expressly, but it may equally be implied from the offeror's language, or it may be inferred from his conduct. ...read more.

There is nothing specific by way of offer or rejection, but amere inquiry, which should have been answered and not treated as a rejection of the offer.' Barbara's letter on Tuesday also included a counter-offer, which 'kills off' the original offer due to the introduction of new terms, in this case, her 'assuming' that the adjustable stool and piano music will be included. This counter-offer killed off Hettie's original offer and makes it incapable of subsequent acceptance by Barbara. The rule of counter offer can be seen in operation in the case of Hyde v Wrench3 where an offer to sell an estate for �1,000 was met by a counter-offer to buy for �950. The counter-offer was rejected, and the buyer then wrote to say that he was prepared to pay �1,000 after all. But the seller now refused to sell to the offeree, even at this price, and the offeree sued. Although the offer to sell had not been withdrawn, it was held that there was no contract, as the counter-offer had amounted to a rejection of the original offer. So based on the classic illustration of the rule of counter-offer above, Barbara's letter cannot be deemed as an acceptance of Hettie's offer due to the counter-proposal introduced. ...read more.

On the other hand, if Hettie's revocation is based on Barbara's assumption that the music stool and piano music will be included, then her revocation is valid, as stated earlier in the case of Hyde v Wrench that the introduction of a counter-offer amounts to a rejection of the original offer. In effect, the revocation by Hettie makes it incapable for a binding contract to exist between herself and Barbara. James LJ: '...It is to my mind quite clear that before there was any attempt at acceptance by the plaintiff, he was perfectly well aware that Dodds had changed his mind and that he had, in fact, agredd to sell the property to Allan. It is impossible therefore, to say there was ever that existence of the same mind between the two parties which is essential in point of law to the making of an agreement.'7 So Barbara's quick acceptance of Hettie's original offer (in the stipulated mode of acceptance instructed by Hettie) does not bring about a binding contract between the two parties, as Barbara is perfectly well aware that Hettie is planning to sell her piano to Philip, and cannot as a point of law endeavour to bind Hettie in a contract, as there has to be an existence of the same mind between them to make it legally binding agreement. ...read more.