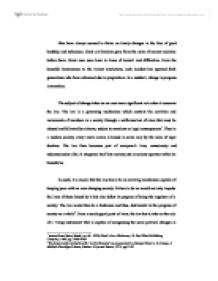 Men have always seemed to thrive on timely changes in the face of great hardship and turbulence. Great civilizations grew from the ruins of ancient societies before them. Great men were born in times of turmoil and difficulties. From the beautiful Renaissance to the violent revolutions, each incident has spurned forth generations who have advanced due to pragmatism. In a nutshell, change is progress in transition. The subject of change takes on an even more significant role when it concerns the law. The law is a governing mechanism which controls the activities and movements of members in a society through a uniformed set of rules that must be obeyed and followed by citizens, subject to sanctions or legal consequences1. Thus in a modern society, every man's action is bound in some way by the rules of legal doctrine. The law then becomes part of everyone's lives, consciously and subconsciously alike. It integrates itself into society just as society operates within its boundaries. As such, it is crucial that the law has to be an evolving mechanism capable of keeping pace with an ever-changing society. Failure to do so would not only impede the lives of those bound by it but also defeat its purpose of being the regulator of a society. The law would then be a hindrance and thus, detrimental to the progress of society as a whole2. ...read more.

Transsexuals have always had a long and fascinating history of discrimination from society all around the world. Often abused and frowned upon as being freaks of nature and outcasts, it is not until recently that attitudes are slowly starting to change sympathetically towards their favour, even in UK. However, the same cannot be said about the government. Notwithstanding growing numbers of public who understand that they are still human beings who should be treated with respect and dignity, courts have always adopted a passive stance where transsexuals are concerned for fear of moral backlash and disdain from the religious communities. Thus, they continue to walk the tightrope, balancing between the preservation of conservative values and the needs of this minority group. When they lose balance and fall over, however, it is mostly to the side of the majority. This means that although it is permissible by law for a transsexual to lead the lifestyle of their choice, there are many areas in the law which restricts their fundamental rights and liberties17. From a big picture perspective, the legal sphere in which a transsexual lives in is extremely confining and suffocating. They are, sadly, living an illegal existence in a legal world. Many have tried to channel their frustrations and complaints through legal means. However, their efforts proved futile as UK courts, under jurisdiction of the HRA, not surprisingly still maintained its stoic position against transsexuals. ...read more.