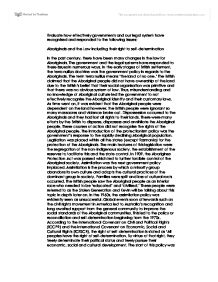 Evaluate how effectively governments and our legal system have recognised and responded to the following issues: Aboriginals and the Law including their right to self-determination

Evaluate how effectively governments and our legal system have recognised and responded to the following issues: Aboriginals and the Law including their right to self-determination In the past century, there have been many changes in the law for Aboriginals. The government and the legal systems have responded to these issues in numerous ways. In the early stages of British settlement, the terra nullius doctrine was the government policy in regards to the Aboriginals. The term terra nullius means 'the land of no one.' The British claimed that the Aboriginal people did not have ownership of the land due to the British's belief that their social organisation was primitive and that there was no obvious system of law. Thus, misunderstanding and no knowledge of Aboriginal culture led the government to not effectively recognise the Aboriginal identity and their customary laws. ...read more.

Assimilation is the process by which a minority group abandons its own culture and adopts the cultural practices of the dominant group in society. Families were split and loss of cultural roots occurred. The British people saw the Aboriginal people as an inferior race who needed to be 'educated' and 'civilised.' These people were referred to as the Stolen Generation and Kevin will be talking about this topic in depth later on. In the 1960s, the assimilation policy was evidently seen as unsuccessful. Global events soon afterwards such as the civil rights movement in America led to Australia's recognition and long awaited support from the general community to improve the social standards of the Aboriginal communities. This led to the policy or reconciliation and self-determination beginning from the 1970s. According to the International Covenant on Civil and Political Rights (ICCPR) ...read more.

However, this new accepting change in government policy was not very effective. Not much action was taken place and the federal parliament did not use their new law-making process for nearly 10 years. In 1968, the council of Aboriginal affairs was established towards funding for the improvement of education, housing and health of the Aboriginal people. In 1989, the establishment of the Aboriginal and Torres Strait Commission dealed with issues specifically concerning them. ATSIC was abolished in 2004. In 1998, it was voted in Canberra that any new changes to the Commonwealth Constitution should acknowledge the 'original occupancy and custodianship of Australia by Aboriginal peoples and Torres Strait Islanders.' Circle sentencing is part of the self-determination policy which is a method that allows elders and community leaders to determine an appropriate sentence will punish and educate the offender, and appease the victim. In general, despite legislation and changes, many Aboriginal communities continue to be disadvantaged and prejudiced in the Australian community. ...read more.