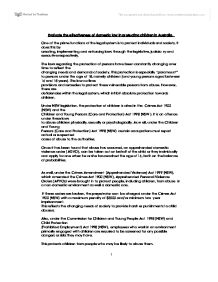 Evaluate the effectiveness of domestic law in protecting children in Australia.

Evaluate the effectiveness of domestic law in protecting children in Australia. One of the prime functions of the legal system is to protect individuals and society. It does this by creating, implementing and enforcing laws through the legislative, judiciary and executive respectively. The laws regarding the protection of persons have been constantly changing over time to reflect the changing needs and demands of society. This protection is especially "paramount" to persons under the age of 18, namely children (and young persons aged between 16 and 18 years). The law outlines provisions and remedies to protect these vulnerable persons from abuse. However, there are deficiencies within the legal system, which inhibit absolute protection towards children. Under NSW legislation, the protection of children is cited in the Crimes Act 1900 (NSW) and the Children and Young Persons (Care and Protection) Act 1998 (NSW). It is an offence under these laws to abuse children physically, s******y or psychologically. As well, under the Children and Young Persons (Care and Protection) Act 1998 (NSW) certain occupations must report actual or suspected cases of abuse to the authorities. Once it has been found that abuse has occurred, an apprehended domestic violence order (ADVO), can be taken out on behalf of the child or they individually can apply for one when he or she has reached the age of 16, both on the balance of probabilities. ...read more.

In addition, The Australian Constitution does not stipulate specific powers for the protection of children from abuse for the Federal Government. It only delineates powers regarding "private" family law matters, such as marriage, divorce and related parental rights. These powers regarding child protection are therefore residual powers for each of the states, causing problems for child enforcement agencies in enforcing laws to interstate child abusers, as seen in The Age newspaper article "Child protection laws should be uniform" (9/4/09). The article tells that the different jurisdictions of each state and lack of uniformity of child protection laws have created "loopholes" for potential abusers. The protection of children can also be provided through the Department of Community Services (DOCS). DOCS can make an application for one or a multitude of care and protection orders to the courts, including removing the abused children from their homes for a short or long period of time. This protects the child from further abuse in the household, but may not be in the best interests of the child, as seen in the SMH article "Trouble ahead for babies shared between angry, divorced parents". The article outlines a study which shows that as much as 60% of infants who live in alternating environments grow up to have "alarming levels of emotional insecurity and poor ability to regulate strong emotion." ...read more.

In particular, the United Nations Convention on the Rights Of the Child 1990 (CROC), which has been ratified by the Australian Government, sets out the basic rights of children, with prime focus on the "bests interests of the child". However, International law, including CROC is only enforceable and thus effective if Australia enacts these laws into their own domestic legislation as Australia is a sovereign nation, which generally has precent over international law. Though international law still has a persuasive effect on Australia's legal system with regard to the protection of children from abuse as seen in B and B v The Minister for Immigration and Multicultural and Indigenous Affairs [2003] FamCa 621. The Full Court of the Family Court ordered the immediate release of five children from a South Australian Baxter Detention Centre as this was not considered with regard to CROC in the "best interests of the child". It therefore can be seen that the legal system provides children with a myriad of protection from abuse. However, the protection of children is lacking in some areas of the legal system, which prevent it to be fully effective. Though as society changes its needs and wants in the future, the legal system will be dynamic in its response to reflect those changes, which will further improve the protection of children from abuse. ?? ?? ?? ?? 1 ...read more.