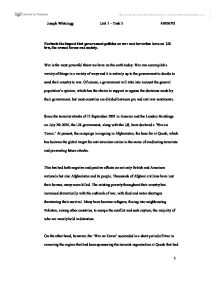 Evaluate the impact that government policies on war and terrorism have on UK law, the armed forces and society.

Evaluate the impact that government policies on war and terrorism have on UK law, the armed forces and society. War is the most powerful threat we have on the earth today. War can accomplish a variety of things in a variety of ways and it is entirely up to the government to decide to send their country to war. Of course, a government will take into account the general population's opinion, which has the choice to support or oppose the decisions made by their government, but most countries are divided between pro and anti-war sentiments. Since the terrorist attacks of 11 September 2001 in America and the London Bombings on July 7th 2005, the UK government, along with the US, have declared a 'War on Terror.' At present, the campaign is ongoing in Afghanistan, the base for al-Qaeda, which has became the global target for anti-terrorism action in the name of eradicating terrorists and preventing future attacks. This has had both negative and positive effects on not only British and American nationals but also Afghanistan and its people. Thousands of Afghani civilians have lost their homes, many more killed. ...read more.

The Terrorism Act 2006 has also extended the pre-charge detention period from 14 to 28 days and widens the definition of terrorism to apply to domestic terrorism to include any political, religious or ideological cause that uses or threatens violence against people or property. Ultimately this legislation creates new offences of inciting terrorism, outlaws terrorist groups and enhances police powers including stop and search and detention. The Prevention of Terrorism Act 2005 has introduced control orders, which allow the government to restrict the activities of individuals it suspects of involvement in terrorist-related activity, but for whom there is not sufficient evidence to charge and along with The Counter-Terrorism Act 2008, enables post-charge questioning of terrorist suspects and allows constables to take fingerprints and DNA samples from individuals suspected of terrorism. The implementation and the effects of many of these laws, some of which undermine the rights to freedom of expression, association, liberty and fair trial, are a key source of criticism, with many refusing to accept that the government's assessment of the level of the threat from terrorism justifies their extent. It has been argued that this new national security agenda has increasingly eroded the liberties enshrined in international human rights and humanitarian law under The Human Rights Act 1998, and national constitutions protecting human or civil rights. ...read more.

Modern terrorist attacks are therefore attacks on people representing the whole of society, not restricting the threat to just armed soldiers. Individuals can find themselves victims of terrorist actions, a relative or friend of a victim, a witness to the actual event, or an observer of the news broadcast in some form. The immediate and direct impacts of war and terrorism are obvious. War is one of the most significant causes of migration as people flee the theatre of conflict. Not only do bombs, artillery etc cause civilians to vacate their houses and lands but so do invading armed forces, land, building, food and resource acquisition. Many past and recent conflicts have caused mass migrations to neighbouring countries where refugee camps have been established to provide basic shelter and food. Some of these camps have been short lived but others have become permanent settlements. Whatever the case, and whatever the cause which may be famine, natural disasters and resource conflicts rather than war, refugee camps cause rapid and drastic environmental change. There can be no doubt that the impact of war and terrorism has an impact on peoples' lives and such impacts could also be detrimental to human's physical and mental well being in the short and long terms. ...read more.