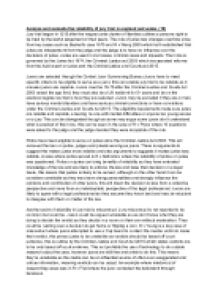 Evaluate the reliability of trial by jury

ï»¿Analyse and evaluate the reliability of jury trial in england and wales. (18) Jury trial began in 1215 after the magna carta charter of liberties outlines a persons right to be tried by the lawful judgement of their peers. The role of juries has changes overtime since from key cases such as Bushell's case 1670 and R v w**g 2005 which both established that juries are independent from the judge and the judge is to have no influence over the decisions of juries. Juries are used in civil cases, criminal cases and inquests. Their role is governed by the Juries Act 1974, the Criminal Justice act 2003 which incorporated reforms from the Auld report on juries and the Criminal justice and Courts act 2015. Jurors are selected through the Central Juror Summoning Bureau Jurors have to meet specific criteria to be eligible to serve as a juror, this can enable jury trial to be reliable as it ensures jurors are capable. Jurors must be 18-75 after the Criminal Justice and Courts Act 2003 raised the age limit, they must also be a UK resident for 5+ years and be on the electoral register as that is how they are selected. ...read more.

decision on a legal basis, this means that justice is likely to be served, although on the other hand it can be considers unreliable as they may have strong personalities and strongly influence the opinions and contribution of other jurors, this will mean the decision is less from a collective perspective and more from an individualistic perspective of the legal professional. Jurors are likely to agree with a legal professional as they assume they know best and may be reluctant to disagree with them on matter of the law. Another point of reliability in jury trial is misconduct. Jury misconduct is not reported to be common but could be. Jurors could be argued unreliable as we don't know what they are doing to decide the verdict as they decide in a room on their own without moderation. They could be rushing over a decision to get home or flipping a coin. R v Young is a key case of misconduct where jurors attempted to use a Ouji board to contact the murder victim to make their verdict, this proves juries to be unrelaible as verdicts should be based off court evidence, this is outline by the Criminal Justice and Court Act 2015 which states verdicts are to be only based off court evidence. ...read more.

R v Ponting is a case where the official secrets act was broken and secrets of the government were expose to the public, the public chose to acquit the defendant as the crime which he committed benefited the public and they as jurors, were able to decide on morals. The jury system can be considered unreliable and there are many reforms which could benefit the system. Placing a camera or tape recorder in the deliberating room would help to prevent jury misconduct in the way which they decide their verdict as they will know they are bing watched and can be confronted and convicted if they do break their role. Another reform could be to remove jury trial and only have a judge or few fit on the bench to decide the verdict, this could prove to be good because they will have sound legal knowledge and will ensure justice is served. To conclude, jury trial can be considered reliable from the legal professionals knowledge, jury equity and eligibility, but on the other hand can be considered unreliable from misconduct, legal professionals dominating and perverse verdict. Ideas for reform could include recording the deliberations or using judges instead. ...read more.