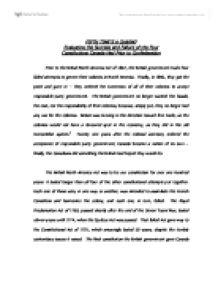 FIFTH TIME'S A CHARM? Evaluating the Success and Failure of the Four Constitutions Canada Had Prior to Confederation Prior to the British North America Act of 1867, the British government made four failed attempts to govern their colonies in North America. Finally, in 1846, they got the point and gave in -- they ordered the Governors of all of their colonies to accept responsible party government. The British government no longer wanted the hassle, the cost, nor the responsibility of their colonies, because, simply put, they no longer had any use for the colonies. Britain was moving in the direction toward free trade, so the colonies would not have a favoured spot in the economy, as they did in the old mercantilist system.1 Twenty one years after the colonial secretary ordered the acceptance of responsible party government, Canada became a nation of its own -- finally, the Canadians did something the British had hoped they would do. The British North America Act was to be our constitution for over one hundred years: it lasted longer than all four of the other constitutional attempts put together. Each one of these acts, in one way or another, was intended to assimilate the French Canadiens and harmonize the colony, and each one, in turn, failed. The Royal Proclamation Act of 1763, passed shortly after the end of the Seven Years War, lasted eleven years until 1774, when the Quebec Act was passed. ...read more.

Regarding criminal cases, British law and language was still used, but regarding civil rights and property laws, Canadien law and the French language would be used. Carleton also received instructions to implement British commercial law, but he hid them and completely disregarded them.10 As a way for Carleton to buy the loyalties of the Canadiens so they would fight alongside the British in the coming Revolution, the Quebec Act failed. They stayed neutral in the fight, and as a result of this neutrality, after the revolution, Carleton became dictatorial: despite provisions in the Quebec Act that allowed the Canadiens to participate in government, they declined. Even though the Constitutional Act of 1791 has been called a "recipe for resentment and confrontation,"11 it lasted longer than the first two attempts combined: fifty years. The problem to be addressed by this act was the colonists' increasing demands for an elected representative assembly, and the problems raised by governing the two different cultures that were present: the Loyalists in the western part of the colony, and the French Canadiens in the east. There were three main components to this act. First, the colony was to be divided into two colonies: Upper Canada and Lower Canada. Second, each colony was given the right to an elected representative assembly. and third, these new assemblies were given very little real power -- in fact, they were little more than glorified debating clubs.12 One other part of the act that was quite important was the setting aside of the Crown and Clergy Reserve Lands. ...read more.