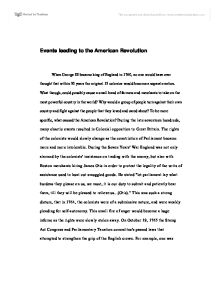 Events leading to the American Revolution

Events leading to the American Revolution When George III became king of England in 1760, no one would have ever thought that within 30 years the original 13 colonies would become a separate nation. What though, could possibly cause a small band of farmers and merchants to take on the most powerful country in the world? Why would a group of people turn against their own country and fight against the people that they loved and cared about? To be more specific, what caused the American Revolution? During the late seventeen hundreds, many chaotic events resulted in Colonial opposition to Great Britain. The rights of the colonists would slowly change as the constriction of Parliament became more and more intolerable. During the Seven Years' War England was not only alarmed by the colonists' insistence on trading with the enemy, but also with Boston merchants hiring James Otis in order to protest the legality of the writs of assistance used to hunt out smuggled goods. He stated "let parliament lay what burdens they please on us, we must, it is our duty to submit and patiently bear them, till they will be pleased to relieve us...(Otis)." ...read more.

Another man to warn the British people about the colonists was William Pitt. A hero from the French and Indian war, He warned the people of England with his "Speech on the Stamp Act" that the Americans were mad and even went on to criticize the Stamp Act in Parliament. Pitt stated "A great deal has been said without doors, of the power, of the strength of America. It is a topic that ought to be cautiously meddled with.... There is not a company of foot that has served in America, out of which you may not pick a man of sufficient knowledge and experience to make a governor of a colony there. But on this ground, on the Stamp Act, when so many here will think in a crying injustice, I am one who will lift up my hands against it (Pitt)." Again, the rights of the colonists were being questioned and rebellion would shortly be forthcoming. Its said "That whenever any form of Government becomes destructive of these ends, it is the right of the people to alter or to abolish it, and to institute a new government, laying it's foundations on such principles and organizing it's powers in such form, as to them shall seem most likely to effect their safety and happiness (Declaration of Independence).". ...read more.

They cornered 10 British soldiers and taunted them until the British fired, killing five. Colonists cried, "Murder!" and their leaders exploited the incident to crystallize anti-British sentiment (Niemczyk)." As much as we would hate to admit it, the Boston Massacre wasn't even a massacre. Howard Zinn put it nicely by saying, " It was clear to me that the Boston Massacre, which took place on March 5, 1770, when British troops killed five colonists is a much-remembered-indeed, overremembered-event. Even the word "massacre" is a bit of an exaggeration: webster's collegiate Dictionary says the word denotes "wholesale slaughter" (Zinn)." The Boston Massacre was obviously not a slaughter, we just think it was because of what a select few wrote over two centuries ago. We must realize that history is controlled by those who wrote it and no two stories will ever be the same. There will always be a hint of mystery when someone try's to figure out what caused the American Revolution and it's exactly the same for any other part of history that was recorded by hand. The people of this generation will never know for sure what happened in the past and neither will any of the future generations of this planet. They will just have to accept the fact that history is an illusion that can change as fast as it appeared. ...read more.