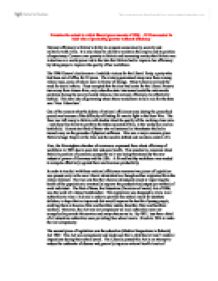 Examine the extent to which liberal governments of 1906 - 1915 succeeded in their aim of promoting greater national efficiency National efficiency is Britain's ability to compete economically, socially and militarily with rivals. It is also about its ability to maintain the empire and its position of supremacy. Concern over poverty in Britain and increasing anxiety that Britain was in decline as a world power led to the idea that Britain had to improve her efficiency by taking steps to improve the quality of her workforce. The 1906 General election saw a landslide victory for the Liberal Party, a party who had been out of office for 10 years. The victory guaranteed many new faces among Liberal mps, some of whom were in favour of change. Many Liberals realized the need for social reform. They accepted that the time had come for the Liberal Party to turn away from laissez-faire; only when the state intervened could the nationwide problems facing the newly elected Liberals, like national efficiency, be effectively tackled. This new idea of governing where there would have to be a role for the state was 'New Liberalism'. One of the reasons why the debate of national efficiency arose during the prescribed period was because of the difficulty of finding fit men to fight in the Boer War. ...read more.

The Liberal's attempt of this was successful but it had little or no benefit for promoting greater national efficiency. In addition, the Liberal government was confronted with research conducted by Rowntree and Booth, which revealed that poverty was more widespread than previously thought and produced new evidence about the cause of poverty. In their surveys Booth and Rowntree showed that the low level of wages was a major contributory factor, and often working class men were simply unable to earn enough to provide for the basic needs of their families, let alone have enough to put money aside for periods of unemployment or sickness and old age. This again suggested that the government would have to take action if such people were going to be able to make positive contribution to society. The acceptance of the above evidence led to a changing attitude from the Liberal government especially after Asquith replaced Campbell-Bannerman as PM and Lloyd George and Winston Churchill held Cabinet offices which enabled them to put 'New Liberal' policies into practice. Also, Lloyd George had returned from a visit to Germany in 1908 convinced of the need to introduce social reforms along the lines of those introduced in Germany. ...read more.

Licensing Laws and pub opening hours were made stricter, in an attempt to prevent workers involved in the war effort being drunk at work and thus decreasing their productivity. Also this meant that less money was spent on alcohol and used instead for a better diet; therefore to a healthier condition of living, which would help them to work longer hours or be more productive then before. In conclusion, the Liberal government had begun to promote greater national efficiency through their social reforms. However, the legislation that the Liberals had introduced between 1906 and 1915 aiming to promote greater national efficiency were full of holes and had a number of exclusions. In 1915 there were still some areas which had not been touched by any of this legislation. For example, nothing had been done for agricultural labourers who remained the worst paid of all workers. Also, between 1906 and 1915 real wages rose very little, and the trade unions were not impressed by the reforms, as they showed by their increasing militancy between 1910 and 1914. Another disturbing fact was that in 1914 the percentage of army volunteers for the First World War rejected as physically unfit was almost as high as it had been for the Boer War. However, this was only to be expected; there was bound to be a time-lag before the benefits of the new state aid made themselves felt. ...read more.