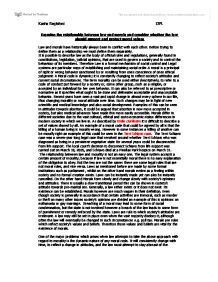 Examine the relationship between law and morals and consider whether the law should support and protect moral values Law and morals have historically always been in conflict with each other. Before trying to define them as a relationship we must define them separately. It is possible to describe law as the body of official rules and regulations, generally found in constitutions, legislation, judicial opinions, that are used to govern a society and to control the behaviour of its members. Therefore Law is a formal mechanism of social control and Legal systems are particular ways of establishing and maintaining social order.A moral is a principal of right or wrong behavior sanctioned by or resulting from ones conscience of ones ethical judgment. A Moral code is dynamic; it is constantly changing to reflect society's attitudes and current social circumstances. The term morality can be used either descriptively, to refer to a code of conduct put forward by a society or, some other group, such as a religion, or accepted by an individual for her own behavior. It can also be referred to as prescriptive or normative as it specifies what ought to be done and delineates acceptable and unacceptable behavior. Recent years have seen a vast and rapid change in almost every sphere in our life, thus changing morality or moral attitude over time. Such changes may be in light of new scientific and medical knowledge and also social development. ...read more.

This is demonstrated by Salmonds model. If the law is to enforce morals, then it is faced with the problem that what one person considers immoral, another might not, so which viewpoint should it sanction? This can be seen in the case of Gillick v West Norfolk and Wisbech Area Health Authority , where Mrs Gillick sought a declaration that what she saw as an immoral activity (making contraceptive advice and treatment available to girls under the age of consent) was, by the nature of its immorality, illegal. There was great moral conflict, as some saw this as immoral (as it would encourage underage sex) whilst others felt that it was moral (as underage sex would occur anyway, but the measures would prevent unwanted pregnancies). The question for the law was which moral viewpoint it would support. After a protracted battle, the House of Lords ruled 3-2 against Mrs Gillick, but stated that they acted due to what was legal under the relevant statutes, rather than because of moral arguments. There are various theories on what the relationship between law and morals should be and how far the law upholds the moral values of society. The first theory to be looked at is that of natural law, espoused by St Thomas Aquinas, and more recently Professor Lon Fuller. This states that there is a higher law (reflected possibly by a moral code to which law must conform. ...read more.

In conclusion then, we can see that there are various theories on how law and morality should relate to each other. Whether or not the law should uphold the moral values of society is still debated, and is made more difficult as, in a pluralist society, it is difficult to know what moral values should be supported, or should the issue be left alone to preserve individual liberty? The current approach by the legal system seems to be that a common morality, based on traditional, 'right-minded' values should be maintained by the law, as espoused by Devlin. This may be due to a backlash against the liberalising values of the Wolfenden report. Cases such as Shaw v DPP and Knuller made use of the offence of conspiracy to corrupt public morals (which had not previously been used since the nineteenth century) and signalled that the law would attempt to uphold society's 'moral values' according to Devlin's doctrine. This approach has continued, as the more recent case of R v Brown shows. The defendants had willingly consented to various sado-masochistic practices, and none of them had complained to the police. Nevertheless, they were prosecuted, and their convictions were upheld by both the House of Lords and the European Court of Human Rights, based on public policy to defend the morality of society. The law is therefore seen to attempt to uphold what it considers to be public morality, even if some may dispute the correctness of that moral code. ?? ?? ?? ?? Kasha Regisford 13PL ...read more.