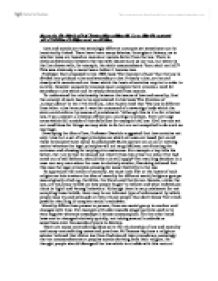 Law and morals are two seemingly different concepts yet sometimes can be inextricably linked. There have been many debates, throughout history, as to whether laws are based on morals or morals derive from the law. There is obvious distinction between the two with issues such as car tax, but where is the line drawn with, for example, the sixth commandment ‘thou shalt not kill’? This was obviously a moral issue before it became law.

Professor Hart proposed in his 1963 book ‘The Concept of Law’ that the law is divided into primary rules and secondary rules. Primary rules, are bound closely with morals and are those which the basic of societies require in order to survive. However as society becomes more complex there creates a need for secondary rules which can be wholly detached from morals.

To understand the relationship between the issues of law and morality, first the concept of each has to be appreciated. In his book ‘The Province of Jurisprudence’ in the 17th Century, John Austin held that ‘The law is different from other rules because it was the command of a sovereign body which the state could enforce by means of punishment.’ Although this is true for criminal law, if you commit a criminal offence you could go to prison, there are large areas which fall outside of this definition for example civil law. Civil law can set out conditions for things we may wish to do but are not compelled to do such as marriage.

Developing the idea of law, Professor Dworkin suggested that law contains not only rules but a set of legal principles on which all laws are based (yet could these ‘principles’ have moral foundations?) Rules operate on an all or nothing matter whereas the legal principles will act as guidelines, not dictating the outcome and allowing for varying circumstances. For example a boy kills his father, the rule is that he should not inherit from his crime but what if he had acted out of self defence, should this rule still apply? The resulting decision in a case can vary even when the case is relatively similar, Dwroking believed that this was the legal principles allowing for some flexibility in the law.

To appreciate the notion of morality, we must look first at the bases of each religion as this is where the idea of morality for different social/religious groups was originally cited e.g. the Bible, the Torah and the Quran. Morals, unlike the law, are voluntary beliefs on how people ‘ought’ to behave and what individuals think is ‘right’ and ‘wrong’ behaviour. Although there is no punishment for not accepting these beliefs, there may be an informal type of enforcement by which people may try and persuade or even rebuke people that don't follow ‘the trend’, possible resulting in complete social breakdown.

Morality differs from person to person, from one social group to another and changes with time. For example attitudes towards single parents used to be very negative whereas nowadays it seems commonplace. On the other hand laws can be changed relatively quickly, not taking several hundreds or sometimes even thousands of years to develop.

There are many contradicting ideas as to the relationship of law and morality and many contradicting cases and practices. St Thomas Aquinas a religious scholar believed that divine law from God should take precedence, seemingly the ten commandments or peoples morals deriving from their religion. He thought people should disregard the law which is at odds with this natural code, unless doing so would lead to social unrest.

Sometimes a change in the law can bring about a change in moral attitudes and sometimes it is the other way around. For example, before the case of R v R in 1991, it was legal for a man to rape his wife since she was legally seen as being almost the property of the husband via the marriage agreement. Morally, this view had been long outdated but the law was slow in catching up.

However the Wolfenden Report of 1957 influenced the law on homosexuality and prostitution and, in some ways, brought about a change in peoples attitudes towards homosexuality. The report considered the contentious issue of the law getting involved in the private lives of individuals and perhaps therefore imposing on individuals practices and beliefs - their morals. Its purpose was to consider the law in relation to homosexual acts and prostitution and the way these cases were handled in court.

Homosexual acts had been prohibited by the Buggery Act 1533 and was only partly revised by the Offences Against the Person Act 1861, which removed the death penalty. This legal view was supported by a large number of people who believed homosexuality was immoral, it must be noted that this moral standpoint was not unanimous.

The committee took three years to come to a general consensus and to make 3 recommendations. Their consensus was ‘ The function of the criminal law is to preserve public order and decency and to protect the civilisation from what is offensive of injurious…’ it continued ‘It is not in our view the function of the law to intervene in the private life of citizens, or to seek to enforce any pattern of behaviour, further than is necessary to carry out the purpose that we have outlined.’

Although the recommendations did not actually become law until quite a few years later, the committee said society and the law should respect ‘individual freedom in matters of private morality’ and stressed it was neither condoning nor condemning homosexual acts. This highlights the ‘live and let live’ attitude that is common today.

However, ultimately the report said that matters of private morality or immorality  was ‘not the laws business’ and Archbishop Fisher added ‘ There is a sacred realm of privacy into which the law should not intrude. This is a principle of the upmost importance for the preservation of human freedom, self respect and self preservation.’  Professor Hart also agreed with this, stating that legal enforcement of a moral code was unnecessary (because a pluralist society won’t suddenly disintegrate), undesirable (as it would prevent development of morality), and in fact morally unacceptable (as it interferes with individual liberty).

Lord Devlin on the other hand disputed this. This became known as the Hart v Devlin Debate. Devlin believed that moral behaviour could be ‘improved’ by using the power of law and moral behaviours disputed by the majority should be made illegal, even when it involves no harm to others. Yet who is to say which individuals morals are ‘right’ and who’s are ‘wrong’?

In conclusion, the law cannot possible maintain a fairness if it promotes moral values. Regarding peoples beliefs, there are no right and wrong answers, in fact it would be ‘immoral’ to judge one another on what other people perceive to be right/good. Who’s moral code would the law turn to? This was highlighted in the case of Gillick v West Norfolk AHA where Mrs Gillick, a mother of a large catholic family, found it unacceptable that her under 16 year old daughters received contraceptive advice and devices. She believed that by the nature of its immorality, this should be illegal. Some saw this as immoral (encouraging underage sex) whilst others felt that it was moral (as underage sex would occur anyway, but the measures would prevent unwanted pregnancies). The question for the law was which moral viewpoint it would support, the House of Lords ruled 3-2 against Mrs Gillick, but stated that they acted due to what was legal under the relevant statutes, rather than because of moral arguments.

How can we tell people what they should believe in and think? By doing this, the law would have a low level of support and in turn would be harder to enforce. Furthermore the law seeks to enforce behaviour, if the law has strong connections to morals and those morals change over time, so must the law, to adapt and allow for these views. And also, the issue of euthanasia. Some people firmly disagree with it yet others do not. The courts have tried not set precedents as each case can be radically different for example the case of Miss B, the High Court decided she had the right to  refuse continuing medical intervention to save her life, while in the case of Pretty v DPP, Dianne Pretty was refused permission for euthanasia by both UK courts and the European Court of Human Rights.