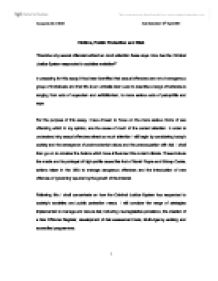 &quot;Examine why s****l offenders attract so much attention these days. How has the Criminal Justice System responded to societies anxieties?&quot;

Victims, Public Protection and Risk "Examine why s****l offenders attract so much attention these days. How has the Criminal Justice System responded to societies anxieties?" In preparing for this essay it has been identified that s****l offenders are not a homogenous group of individuals and that this is an umbrella term used to describe a range of behaviours ranging from acts of voyeurism and exhibitionism, to more serious acts of pedophilia and r**e. For the purpose of this essay I have chosen to focus on the more serious forms of s*x offending which in my opinion, are the cause of much of the current attention. In order to understand why s****l offenders attract so much attention I will begin by considering today's society and the emergence of post-modernist values and the preoccupation with risk. I shall then go on to consider the factors which have influenced this current climate. These include the media and its portrayal of high-profile cases like that of Sarah Payne and Sidney Cooke, actions taken in the USA to manage dangerous offenders and the introduction of new offences of 'grooming' spurred by the growth of the internet. Following this I shall concentrate on how the Criminal Justice System has responded to society's anxieties and public protection needs. I will consider the range of strategies implemented to manage and reduce risk, including new legislative provisions, the creation of a s*x Offender Register, development of risk assessment tools, Multi-Agency working and accredited programmes. Finally I will consider the effectiveness of such interventions and whether the current preoccupation with public protection and management of offenders has been introduced at the expense of this category of offenders, who are now at risk of over inclusiveness and erosion of their human rights. Social Theorists have noted a shift from what was once a 'modernist' society to one with post-modernist values (Beck 1986, Giddens 1990 & Garland 1985). ...read more.

Recently, the Criminal Justice Act (2003) has introduced Extended sentences for Public Protection (EPP) and Indeterminate sentences for Public Protection (IPP) to further restrict liberty in the interest of public protection. Decisions on who may be sentenced to such will be dependent upon the level of risk they pose, and whether or not they can be managed in the community. The Criminal Justice Act (2003) also introduced 'grooming' as a criminal offence, following heightened awareness of the dangers of this. The aim is to proactively monitor those who make contact with children online in order to engage in s****l activity offline and to intervene to protect the child before any physical or s****l harm is caused. The s****l Offences Act (2003) also modernises the law on s****l offences and introduces new offences designed to protect complainants of either gender who suffer from mental disorder. Multi-Agency Public Protection Panel Panels (MAPPPs) have been introduced under the Criminal Justice Court Services Act (2000) to create a seamless approach to the management of s****l offenders (Home Office 2001a). Police, probation and prison officers (following implementation of the Criminal Justice Act 2003), have a statutory duty to implement inter-agency arrangements for the assessment and management of 'the risks posed by s****l and violent offenders' (Home Office 2001a). The government now allows representatives of local communities to sit in on MAPPPs meetings so that a local community view on risk management can be expressed. Furthermore MAPPPs are required to produce and publish annual reports of their activities both of which demonstrate a marked attempt to ensure greater accountability (Kemshall 2003, p90). To reduce the likelihood of s*x offender recidivism a number of Interventions have been introduced under the s****l Offences Act (2003). These include; s*x Offender Treatment Programmes (SOTP) run in prisons which aim to assess and treat all s****l offenders serving a sentence of four or more years (Craissati, 1998). ...read more.

Also, risk levels are not static, therefore offenders must be subjected to regular risk reviews in order to proactively identify any changes in the level of risk they pose. In order to conclude, it has been identified that we are currently living in a post-modernist society obsessed by risks which threaten our existence. These risks have been further exacerbated by globalisation and the onslaught of saturated and distorted messages of risk. Also by the creation of moral panics spurred via our sensationalist media portraying s****l offenders as 'mad, sad or bad' and a dangerous risk to society which has elevated them into the position of 'folk devil'. This has led to the creation of a wealth of legislative provisions, including the introduction of a s*x Offender Register, extended sentences, multi-agency working and the formation of new s****l offences. Interventions have also been designed in an attempt to reduce the risk of re-offending, including accredited programmes, restriction orders and increased use of electronic monitoring. However, in adopting these new ways of working we have had to swallow a number of principles including innocent until proven guilty, proportionate sentencing, avoidance of double jeopardy and balance of individual and community rights, including right to know and offenders right to privacy. Primary support appears to be in the willingness of successive governments to endorse a populist, tabloid driven agenda in order to promote itself as an effective organisation. Whilst this may appease the public, such attempts to curb s****l offences by incarceration and placing restrictions on liberty may not be as effective as perceived. In my opinion, greater provisions for management in the community may prove to be more effective and could aid the successful re-integration of this category of offenders. However, this will not be achievable until the media finds another group of individuals on which it can focus its attention, or until we have a better understanding of s****l offenders making us less fearful and more tolerating of such offenders. ...read more.