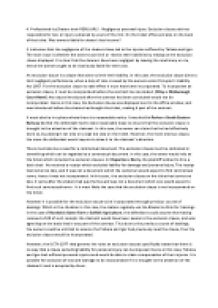 ﻿4. Professional Ice Skaters train REGULARLY . Negligence personal injury. Exclusion clause said not responsible for loss or injury sustained by users of the rink. On the ticket office and also on the back of the ticket. Was owners liable for skater?s lost income? It is obvious that the negligence of the cleaners have led to the injuries suffered by Tatiana and Igor. The main issue is whether the owners can limit or restrict their liabilities by relying on the exclusion clause displayed. It is clear that the cleaners have been negligent by leaving the machinery on ice, hence the owners ought to be vicariously liable for their acts. An exclusion clause Is a clause that aims to limit their liability. In this case, the exclusion clause aims to limit negligent performance, when a duty of care is owed by the owners under Occupier?s Liability Act 1957. ...read more.

As these arise due to the negligence of the cleaner, the exclusion clause must be sufficiently clear to exempt such liability. In White v John Warrick v Sons, there was a clause that the owner relied on to exempt liability for personal injury caused by negligence. It was ambiguous hence the contra proferentum rule applied. In this case, only clauses which expressly referred to negligence will allow the party to avoid liability for negligence if the clause could not be interpreted as referring to other kinds of liability. Hence it could be said that the exclusion clause in the ice rink had not been clear enough and the owner cannot rely on it to exempt liability for personal injury. The clause will thn be interpreted in favour of Tatiana and Igor. Assuming that the exclusion clause has been incorporated due to previous course of dealings, the UCTA would negate its effect. The owners would ultimately be liable to compensate the skaters. The owners should pay the 50000 of loss of income to the skaters. ...read more.