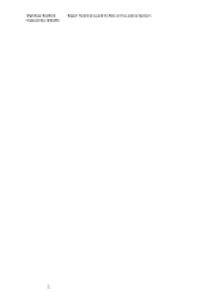 Expert Testimony and Its Value In the Justice System

﻿Matthew Bedford Expert Testimony and Its Role in the Justice System Student No: 036176 ________________ Contents Introduction 3 Background Information 4 Issues with Expert Testimony 5 The expert 5 The Evidence 9 Concurrent evidence 16 Conclusion 19 Introduction This project will analyse the current law relating to the procedures for the use of expert witnesses in England and Wales in relation to both criminal and civil trials. The project will highlight some of the issues in relation to expert testimony which have lead to miscarriages of justice. It will then consider the changes which have been proposed, such as those by the Chief Medical Officer (Sir Liam Donaldson) in his report on the use of expert witnesses in family law cases[1], and discuss how effective their implementation would be on fixing the issues which have been discovered. It will also consider whether changes should be made to the English system while looking at the comparative current system used in New South Wales in Australia. The project will move on to reflect upon how effective expert witnesses are in conveying their knowledge to the lay jury who generally have little appreciation of the complex nature of the particular subject matter. Before going into the detail on the reforms which should be made to the laws regarding expert testimony the project will begin by looking at the issues which currently affect the use of expert witness in the United Kingdom. The project will then reach a conclusion upon what exact changes need to be made to the current law in order to enhance it. Background Information In 1782 a court was considering litigation relating to Wells Harbour in Norfolk when John Smeaton, a leading civil engineer, was called upon to give evidence. This moment is widely regarded as the root of the modern day rules on the use of expert evidence. An expert witness is defined as ?One having special knowledge of the subject about which he or she is testifying?[2] and in the modern ...read more.

This test would be similar to rule 702 of the United States Federal Rules of Evidence[18] which states: ?If scientific, technical, or other specialized knowledge will assist the trier of fact to understand the evidence or to determine a fact in issue, a witness qualified as an expert by knowledge, skill, experience, training, or education, may testify thereto in the form of an opinion or otherwise, if (1) the testimony is based upon sufficient facts or data, (2) the testimony is the product of reliable principles and methods, and (3) the witness has applied the principles and methods reliably to the facts of the case.? This rule sets out exactly what expert testimony needs to be for it to be admissible and also sets out a three stage test which judges can follow when making their decision. This test is not meant to be followed as a definite list and the three stages are more guidelines than criteria which must be achieved. This flexibility allows for the rules to be implemented no matter what the subject of the testimony is. It has however been argued that these guidelines are only really applicable to scientific fields and therefore different guidance is required for non-scientific fields.[19] Due to theses slight issues the actual proposals for reform which the Law Commission suggests differ from rule 702. The Law Commissions suggestion is this statutory provision: ?(1) The opinion evidence of an expert witness is admissible only if the court is satisfied that it is sufficiently reliable to be admitted. (2) The opinion evidence of an expert witness is sufficiently reliable to be admitted if:? (a) the evidence is predicated on sound principles, techniques and assumptions; (b) those principles, techniques and assumptions have been properly applied to the facts of the case; and (c) the evidence is supported by those principles, techniques and assumptions as applied to the facts of the case. ...read more.

Our rules even appear to be totally archaic when compared to the rules in the United States which have themselves come under a large amount of criticism and scrutiny. The United States had listened to criticism and has altered their rules over time so that they now contain guidelines for what is admissible as evidence. In contrast the rules in England and Wales lack clarity with the law still awaiting reform which has been necessary for many years. This need for reform is also shown in the report set out by the Law Commission which suggest exactly how the law should be. Their reports contain prolific detail on why and how the law should be changed. The changes, such as the new statutory provision, that are suggested should be implemented as soon as possible as they are clearly superior to the current rules. The longer the current rules remain in force, the more likely it is future miscarriages of justice will occur due to misleading expert evidence. In the current financial climate it is also vital that as much money as possible is saved from the costs of the court system. At present time spent listening to individual experts giving their testimony is time which the courts cannot afford to waste. If the use of concurrent evidence would save up to 80% of the time currently used, as evidence shows, then its use is vital to the success of the cost saving initiatives which are being implemented by the current government. It is apparent that the use of expert witnesses is something which the court system relies heavily upon. Due to its importance with regards to the decisions made by the judge and jury it is imperative to the future of the United Kingdom?s legal system that the area is reformed to a suitable standard. It would be advantageous to at least trial the concurrent evidence method to see if it is as effective in the United Kingdom as it is in other countries. If this is the case then the system should be implemented as soon as possible. ...read more.