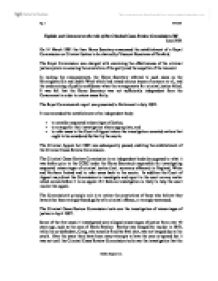 Explain and Comment on the role of the Criminal Cases Review Commission.

Explain and Comment on the role of the Criminal Cases Review Commission [20] June 2001 On 14 March 1991 the then Home Secretary announced the establishment of a Royal Commission on Criminal Justice to be chaired by Viscount Runciman of Doxford. The Royal Commission was charged with examining the effectiveness of the criminal justice system in securing the conviction of the guilty and the acquittal of the innocent. In making the announcement, the Home Secretary referred to such cases as the Birmingham Six and Judith Ward which had raised serious issues of concern to all, and the undermining of public confidence when the arrangements for criminal justice failed. It was felt that the Home Secretary was not sufficiently independent from the Government in order to review cases fairly. The Royal Commission's report was presented to Parliament in July 1993. ...read more.

The Criminal Cases Review Commission took over the investigation of miscarriages of justice in April 1997. Some of the first cases it investigated were alleged miscarriages of justice from over 40 years ago, such as the case of Derek Bentley. Bentley was hanged for murder in 1953, while his co-defendant, Craig, who actually fired the fatal shot, was not hanged due to his youth. Over the years there have been many attempts to have the case re-opened but it was not until the Criminal Cases Review Commission took over the investigation that the case was referred back to the Court of Appeal. In July 1998 the Court of Appeal held that the summing-up of the judge at the trial had not been fair and it quashed the conviction. Whenever the Commission considers that there is a real possibility that a conviction or sentence would not be upheld, it will refer the case. ...read more.

In the first four and a half years of work the Criminal Cases Review Commission received almost 4,500 applications and had dealt with about 3,500 of these. The Commission had referred 145 cases to the Court of Appeal. 73 of these had been heard and the convictions quashed in 55 cases. It is important that claims that there has been a miscarriage of justice should be dealt with as quickly as possible so that any injustice can be put right and so that, where the claim is rejected, everyone concerned can know where they stand and get on with their lives. "I believe that the Criminal Cases Review Commission will come to play a key role in enhancing public confidence in the integrity and effectiveness of the criminal justice system as a whole, as Parliament intended, and I look forward to seeing it do so." -Jack Straw, Home Secretary, 2001 Pg. 1 04/12/03 Nasima Begum 12A ...read more.

A good, comprehensive essay, summarising the role of the CCRC.

The essay is a little dated now, however. The Commission has been criticized for the length of time it takes to examine cases, and the way it produces statistics.

Further, the Innocence Network has recently issued a report on the effectiveness of the commission which might bear briefly mentioning: http://www.innocencenetwork.org.uk/ccrcreport