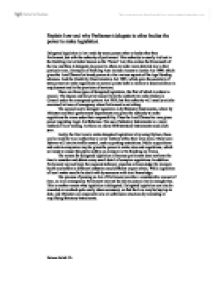 Explain how and why Parliament delegates to other bodies the power to make legislation.

Explain how and why Parliament delegate to other bodies the power to make legislation. Delegated legislation is law made by some person other or body other than Parliament, but with the authority of parliament. This authority is usually laid out in the Enabling Act or better known as the 'Parent' Act, this creates the framework of the law and then it delegates its power to others to make more detailed law in that particular area. Examples of Enabling Acts include Access to Justice Act 1999, which gives the Lord Chancellor broad powers to alter various aspects of the legal funding schemes. ...read more.

The second way to delegate legislation is by Statutory Instruments, where by Ministers and their government departments are given the authority to make regulations for areas under their responsibility. Thus the Lord Chancellor was given power regarding Legal Aid Schemes. The use of statutory Instruments is a major method of Law-making. As there are about 3000 statutory instruments made each year. Lastly, the final was to make delegated legislation is by using Bylaws, these can be made by local authorities to cover matters within their own areas. ...read more.

In addition Parliament may not have the required technical expertise or knowledge for example health and safety in different industries need different expert advice. While legislation of local matter need to be dealt with by someone with local knowledge. The process of passing an Act of Parliament can take a considerable amount of time, an in an emergency, Parliament may not be able to pass an Act in enough time. This is another reason why legislation is delegated. Delegated legislation can also be amended or revoked quite easily when necessary, so that the Law may be kept up to date, and Ministers can respond to new or unforeseen situations by amending or amplifying Statutory Instruments. Rebecca Hallett 12b ...read more.