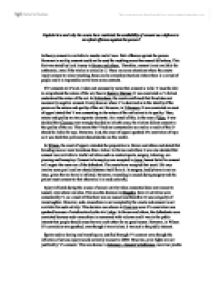 Explain how and why the courts have restricted the availability of consent as a defence to non-fatal offences against the person?

Explain how and why the courts have restricted the availability of consent as a defence to non-fatal offences against the person? In theory consent is available to murder and all non- fatal offences against the person. However in reality, consent could not be used for anything more than assault & battery. This fact was stated by Lord Jauncy in Brown and others. Therefore, consent is not available for euthanasia, even if the victim is critically ill. There are some situations where the courts imply consent to minor touching, these can be everyday situations where there is a crowd of people and it is impossible not to have some contacts. If V consents to D's act, it does not necessarily mean that consent is valid. V must be able to comprehend the nature of the act, thus in Burrel v Harmer, D was convicted as V did not understand the nature of the act. In Richardson, the courts confirmed that fraud does not necessarily negative consent. ...read more.

In Brown and others it was also decided that consent was available to lawful activities such as contact sports, surgery, tattooing, ear-piercing and horseplay. Consent in horseplay was accepted in Jones; honest belief in consent will negate the mens rea of the defendant. The courts have accepted that social life may involve some peril and law should distance itself from it. In surgery, bodily harm is not an issue, given that no harm is inflicted. However, wounding is caused during surgery and the patient must consent to that otherwise it is made unlawful. Injury inflicted during the course of s****l activity when consented does not amount to assault; even where one dies. This was the decision in Slingsby, here all activities were consented by V, as a result of this there was no assault and therefore D was not guilty of manslaughter. However, sado-masochism is not accepted by the courts and consent is not available for such activity. ...read more.

Where an off-the-ball incident has occurred, D will be liable as it involves deliberate use of unlawful force. This was shown in Billinghurst, where the defendant was convicted as more force was used then what would be consented in a rugby game. In contact sports players impliedly consent to D doing what the rules of the game permit and these rules only provide a guide as to what has been consented. The courts have restricted the availability of the defence by not making it available for anything more serious than common assault, as shown in Brown and others. This means that euthanasia is illegal and assisting or attempting suicide is also against the law. Some countries allow euthanasia, i.e. Netherlands. The defence is not restricted completely for any offence more serious than assault as the courts allow consent in contact sports, tattooing and horseplay. The law should not interfere with individual freedom in these situations as community life involves mutual risk and sports are there to entertain the public, therefore convicted a player when serious injury is inflicted would not be in the public interest. ...read more.