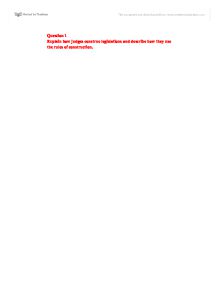 Explain how judges construe legislations and describe how they use the rules of construction.

Question 1 Explain how judges construe legislations and describe how they use the rules of construction. Question 2 Explain the statement that "not all agreements are contracts". Composition of a contract A contract is founded on agreement which arises from offer and acceptance. When one person makes an offer and another person accepts that offer, there is a contract. If no or not a properly acceptance exits, there is no contract. Consequently, not all agreements are contracts. General Rule -- Communication of the acceptance The general rule is that an acceptance must be communicated to the offeror. The acceptance is generally only validly communicated when it is actually brought to the attention of the offeror. The operation of this rule was illustrated by Denning LJ v. Miles Far East Corp. In the case, he said that if an oral acceptance is drowned out by an overflying aircraft, such that the offeror cannot hear the acceptance, then there is no contract unless the acceptor repeats his acceptance once the aircraft has passed over. ...read more.

At the same time Y has performed a socially useful act in returning the dog and he should be rewarded for so doing. On the other hand, in the case of bilateral contract which imposes mutual obligations upon the parties, the effect of such a rule would be to subject the accepting party to obligations of which he was unaware. However, the rule which has been adopted in England is that a person who, in ignorance of the offer, performs the act or acts requested by the offeror is not entitled to sue as on a contract. An offer cannot be accepted by someone who is ignorant of the existence of the offer or by someone who does not have the offer in his mind when he does the act which he alleges constitutes the acceptance. 2. Acceptance by Silence The general rule is that acceptance of an offer will not implied from mere silence on the part of the offeree and that an offeror cannot impose a contractual obligation upon the offeree by stating that, unless the latter expressly rejects the offer, he will be held to have accepted it. ...read more.

3. Uncertainty of an agreement In order to constitute a valid contract, the parties must express their agreement in a form which is sufficiently certain. There are two types of uncertain agreement: Vagueness and Incompleteness. --Vagueness In the case of Scammell and Nephew Ltd v. Ouston, where the parties entered into an agreement to buy goods on 'hire purchase'. It was held that this agreement was too vague to be enforced because there were many different types of hire purchase agreements in use, these agreement varied widely in their content and it was not clear what type of hire purchase agreement was envisaged. As a result, the courts are reluctant to find that an agreement is so vague that it cannot be enforced. --Incompleteness The agreement may be incomplete because the parties have failed to reach agreement upon a particular tissue. Conclusion The above situations are no contract. The valid contract has a properly communication of offeror and offeree. In order to have a valid agreement, the offer and acceptance should exist clearly. Otherwise the contract cannot be enforced by court. ...read more.