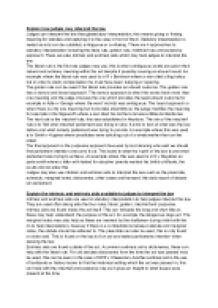 Explain how judges may interpret the law and the intrinsic and extrinsic aids available to them.

ï»¿Explain how judges may interpret the law. Judges can interpret the law throughstatutory interpretation, this means giving or finding meaning for statutes and applying it to the case in front of them. Statutory inteprretation is neded as acts can be outdated, ambiguous or confusing. There are 4 approaches to statutory interpretation including the litera rule, golden rule, misthcief rule and purposive approach. There are also intrinsic and extrinsic aids which may help judges to interpret the law. The literal rule is the first rule judges may use, this is when ambiguous words are given their natural and ordinary meaning within the act despite it possibly causing an absurd result. An example where the literal rule was used is in R v Berriman where a man died oiling trakcs but in order to claim compensation he must have been relaying or reparing. ...read more.

An example where this was used is in Smith v Hughes where prostitutes were soliciting out of a windowrather than on the street. The final approach is the purposive approach favoured by lord denning who said we should find parliament intention and carry it out. This looks to what the â€˜spiritâ€™ of the law is and what parliament was trying to achieve. An example where this was used is in R v Registrar ex parte smith where a killer with hatred for adoptive parents wanted his birthb cirtificate, the courts did not allow this. Judges may also use intrinsic and extrinsic aids to interpret the law such as the preamble, schedule, marginal notes, dictionaries, other cases and hansard; the daily report of debate sin parliament. ...read more.

Extrinsic aids are found outside of the act. A common extirnsic aid is dictionaries, these can help with the literal rule. For old statutes dictionaries from the time the act was passed may be used, this can be seen in the case of DPP v Cheesman. Another extrinsic aid is the use of textbooks or history books to find the historical setting which the act was passed in, this can help with the mischief and purposive rule as it gives an insight to what issues were present at the time. The largest arguably most important extirnsic aid is the use of hansard. Hansard is the daily report of debates in parliament. This was banned in Davis v Jhonson as Lord scarman stated it is too confusing and time consuming however was kater unbanned in Pepper v Hart. this is helpful as issues from th case infront of the judge may have been raised and cisussed during the passing of a law. ...read more.