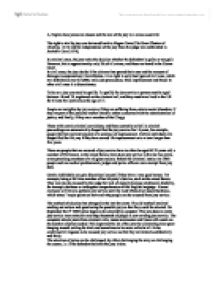 A, Explain how jurors are chosen and the role of the jury in a crown court trial The right to trial by jury can be traced back to Magna Carta (The Great Charter of Liberties, 1215) and the independence of the jury from the judge was established in Bushell's Case (1670). In criminal cases, the jury make the decision whether the defendant is guilty or not guilt. However, this is approximately only 3% of all crimes, and these are heard in the Crown Court. In civil cases, the jury decide if the claimant has proved their case and the amount of damages (compensation). Nevertheless, it is a right in only four types of civil case, which are: defamation over �10,000, malicious prosecution, false imprisonment and fraud. In other civil cases it is discretionary. To be on a jury you need to qualify. To qualify for jury service a person must be aged between 18 and 70, registered on the electoral roll, and they must have lived in the UK for at least five years since the age of 13. ...read more.

The method of selection has changed in the last few years. The old method involved sending out notices and questioning the possible jury so that they could be selected. On September the 4th 2000 juries began to be selected by computer. This was done to make jury service more attractive and stop thousands of people a year evading jury service. The computer selects jurors from electoral rolls, issues summonses and liases with courts on the number of jurors needed. This improved the lot of the juror by eliminating time spent hanging around waiting for trials and sometimes to be never called at all. It also centralised all requests to be excused jury service so that they are treated confidentially and fairly. The selection of juries can be challenged, by either challenging the array or challenging the course, i.e. if the defendant believes the jury is bias. B, Discuss the advantages and disadvantages of using a jury to hear a criminal trial There are a great number of advantages and disadvantages of using a jury to hear a criminal trial. ...read more.

However, despite representing different cultures within society, certain individuals may be prejudice or biased. For example, against the police or racially prejudiced. Such as in the case ofR v Gregory (1993), where a juror showed racial overtones. Media coverage may influence jurors, eg R v Taylor (1993) - newspapers gave false impression of video sequence, and in addition to this, the more recent trial such as the Ian Huntley case. Jurors may not understand the case that they are trying. The Runciman Commission (1992) informed us that just under 10% of jurors admitted difficulty with a case. The juries usually have no legal knowledge or training. A disadvantage linked to this is that there is no intelligence test required. A person may not have to be "intellectual" to be on a jury, but surely a certain amount of intelligence is required for understanding of trials. Other disadvantages include the jury having a financial interest in the length of trials, that "nobbling" may occur, whereby the jury are bribed or threatened, and finally that it is a slow and expensive process, with 12 people needing expenses during the time the trial is on. ...read more.