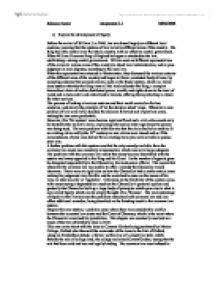 Explain the development of Equity.

a) Explain the development of Equity Before the arrival of William I, in 1066, law was based largely on different local customs, meaning that the systems of law varied in different areas of the country. The King had little control over the whole country, with no effective central government. When William I became King of England he began to standardise the law, establishing a strong central government. William sent out different representatives of the crown to various areas of the country to check local administration, and to pass judgment in local disputes, according to the local law. When the representatives returned to Westminster, they discussed the various customs of the different areas of the country and began to form a consistent body of rules, by accepting customs that seemed rational, such as the feudal system, which is a tiered class system whereby the King owns all the land and under the King, a complex hierarchical chain of nobles distributed power, wealth, and rights down to the level of Lords and in turn each Lord rented land to tenants, offering them protecting in return for other services. The process of looking at various customs and their worth carried on for two centuries, and slowly the principle of 'let the decision stand' arose. ...read more.

James I made the ruling that when the Common Law and Equity were in conflict, as in The Earl of Oxford's Case, Equity shall always prevail. With this new law meaning that Equity would prevail if conflict arose, there was no reason why the two courts could not be combined, as the two systems would remain separate from each other, and so this was introduced with the Judicature Acts 1873-1875. This meant that all courts could administer both systems, applying both equitable and common law principles to every case and awarding either common law or equitable remedies. The law system was finally established with no problems and common law and equity working together as the twin pillars of English Law. b) Describe and comment on the role of Equity today Although both the common law and equity law down rules, equity also created maxims. These have to be satisfied before equitable rules could be applied, they were designed to ensure morally fair decisions. An example of the maxims is 'he who comes to equity must come with clean hands', an example of this could be that if you desire your tenant to vacate, you must have not violated the tenant's rights. ...read more.

He was responsible for developing the new equitable principle of promissory estoppel, where someone is stopped from going back on a promise. This principle was developed through the High Trees case (1947). This case came about when in 1937 a block of flats was leased for 99 years at a rent of �2,500 per annum. With the bringing of war and many vacancies in the flats, it was agreed in 1940 to reduce the rent by half, with no time limit set for the reduction, and by 1945 the flats were full again. The leasing company wrote to the tenants, claiming the full rent for the last two quarters of 1945, the time when the flats became full. In defence, the tenants claimed that the agreement of 1940 related to the whole term of the lease. The case was settled with the leasing company being successful and able to put the rent back up, on the basis that the agreement was only intended to last until the flats were full. However, the court stated that had they tried to claim the rent for the time when the flats were not full they would have been stopped form doing so as the promise was intended to be binding until such a time as the flats were full. This new concept was introducing an element of fairness into the contract law. Rebecca Turner Assignment 1.1 08/04/2009 ...read more.