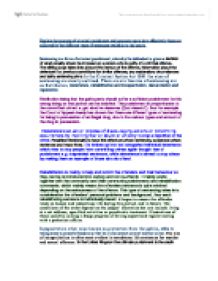 Explain the purpose of criminal punishment and comment upon how effectively these are achieved by the different types of sentences available to the courts.

Explain the purpose of criminal punishment and comment upon how effectively these are achieved by the different types of sentences available to the courts. Sentencing is a form of criminal punishment, whereby the defendant is given a decision of what penalty should be imposed on a person who is guilty of a criminal offence. The sitting judge takes into account the serious of the offence, information about the defendant i.e. previous convictions for similar offences, any explanatory circumstances and lastly sentencing aims. In the Criminal Justice Act 1991 the aims of sentencing are clearly outlined. There are six theories of sentencing are on Retribution, deterrence, rehabilitation and incapacitation, denunciation and reparation. Retribution being that the guilty party should suffer a sufficient punishment for his wrong doing so that justice can be satisfied. The punishment is proportionate to the committed crime i.e. get what he deserves ("just deserts"), thus for example the Court of Appeal clearly has shown that there are different types of sentencing for being in possession of an illegal drug, due to the various types and amount of the drug in possession. ...read more.

It hopes to ensure the offender leads an honest and industrious life during this period, and in future. The conditions of the order depend on the judges' discretion but can include living at a set address, specified activities or psychiatric treatment. Illustrations of these could be joining a drugs program or having supervised regular meting with a probation officer. Incapacitation other wise known as protection from the public, refers to taking away a person's freedom so that he or she cannot commit another crime. The aim of incapacitation is often most evident in mandatory life sentences for murder and sexual offences. In the United Kingdom the ultimate punishment is the death sentence thought this is not used unlike America. The main way of protecting the public is by the offender being imprisoned and sanctioned for instance to protect the public from people who commit sexual offences, they have to be institutionalized in a prison to keep them from re-offending also in some countries to protect the public the hands of thieves are cut off to prevent further stealing. ...read more.

Custodial sentences are punishments that involve taking away the offender's freedom such as Curfew Orders which are similar and are used to protect the public as they limit the offender to a set address for a certain period of a day e.g. enforced by electronic tagging. Another type of sentence given can be Fines which also are used for nearly all motoring offences, though the court may also use disqualification. Fines and discharges are typically given out for less serious offences. Fines are graded from 1-5 where one involves a maximum payment of �200 and five involves a maximum payment of �5000 undoubly an offender's ability to pay is taken into account.. Community sentences affect a defendant's liberty but are served outside prisons and other establishments. They are only given if the offence is serious enough to warrant it, they are suitable for the offender and a restriction of liability is commensurate with the serious of the offence. Such as probation and community service. Youth sentencing according to the criminal justice act 1991 has different theories but have the same basic principles. As they are youths ...read more.