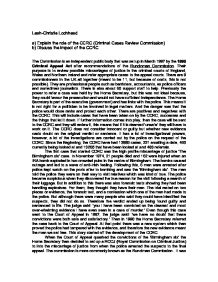 Explain the role of the CCRC (Criminal Cases Review Commission)

Leah-Christie Lochhead a) Explain the role of the CCRC (Criminal Cases Review Commission) b) Discuss the impact of the CCRC The Commission is an independent public body that was set up in March 1997 by the 1995 Criminal Appeal Act after recommendations of the Runcinman Commission. Their purpose is to review possible miscarriages of justice in the criminal courts of England, Wales and Northern Ireland and refer appropriate cases to the appeal courts. There are 9 commissioners in the UK all together (meant to be 11, but because of costs, this is not possible). They are professional people such as barristers, accountants, ex police officers and sometimes journalists. There is also about 60 support staff to help. Previously the power to refer a case was held by the Home Secretary, but this was not ideal because, they could favour the prosecution and would not have sufficient independence. The Home Secretary is part of the executive (government) and has links with the police. This means it is not right for a politician to be involved in legal matters. And the danger was that the police would close ranks and protect each other. There are positives and negatives with the CCRC. This will include cases that have been taken on by the CCRC, successes and the things that let it down. ...read more.

In 1998 the Appeal Court quashed Bentley's conviction after going to the CCRC on the grounds the original trial judge was biased against the defendants and misdirected the jury on points of law. Scientific evidence also showed the three police officers who testified about Bentley shouting "Let him have it" had lied under oath. A more recent case from the Criminal Cases Review Commission is the Sally Clark case 2003. Baby Christopher was born on September 22, 1996, and found dead in his Moses basket at 11 weeks. Death was certified as "natural causes" and Sally and Steve decided that the best bereavement therapy was another baby. Harry was born on November 29, 1997, and eight weeks later suddenly collapsed in his bouncy chair. The only common factor, which may or may not be relevant, is that both deaths followed shortly after vaccination. There is research into the possibility that these vaccinations can cause death within a few days if infants have certain genetic defects. After four weeks' delay, during which Sally and Steve had made several enquiries as to progress of the autopsy, both were arrested. Dr Williams reported retina and brain damage attributed to "baby shaking". The case was later referred to Professors Green and Meadow, a team well known in the profession and media for their campaign that up to 40% of cot deaths are in fact abuse, who thought it "likely" but were cautious enough to then recommend the cause of death as "unascertained." ...read more.

Sadly the impact of the Criminal Cases Review Commission does have some disadvantages, including the fact that the CCRC is not an appeal court which means it does not have the power to overturn/quash a conviction. It can sometimes be awkward because they can only consider cases which have been through and failed the ordinary appeal route. There has been evidence to suggest that the CCRC have a backlog of cases, apparently it can take them about 7 months to deal with a case, sometimes longer, which can cause problems. A large problem caused by the CCRC having low independance, they require the police to re-investigate which has called people to want them to have greater powers. Even though the CCRC have had amazing impacts, they still dont have not removed the reason why misscariages of justice occur. The CCRC has faced continuous financial cuts over the past four years. Overall, the positives seem to be less than the negatives but those positives, make a massive difference to the system itself. The impact is that the misscariages of justice are sorted and that the people who are part of the CCRC are proud of what they have achieved. Many people have faith in the CCRC because of the many things they have done. In the future, they should improve, gain more authority and control and make sure miscarriages of justice are sorted. Maybe they will be able to stop miscarriages of justice before they happen! ...read more.