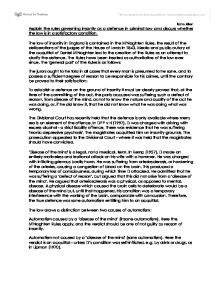 Explain the rules governing insanity as a defence in criminal law and discuss whether the law is in a satisfactory condition.

Explain the rules governing insanity as a defence in criminal law and discuss whether the law is in a satisfactory condition. The law of insanity in England is contained in the M'Naghten Rules, the result of the deliberations of the judges of the House of Lords in 1843. Media and public outcry at the acquittal of Daniel M'Naghten led to the creation of the Rules as an attempt to clarify the defence. The Rules have been treated as authoritative of the law ever since. The 'general part' of the Rules is as follows: The jurors ought to he told in all cases that every man is presumed to he sane, and to possess a sufficient degree of reason to be responsible for his crimes, until the contrary be proved to their satisfaction; To establish a defence on the ground of insanity it must be clearly proved that, at the time of the committing of the act, the party accused was suffering such a defect of reason, from disease of the mind, ...read more.

Therefore, the true defence was sane automatism entitling him to an acquittal. The law draws a distinction between two causes of automatism: Automatism caused by a "disease of the mind" (insane automatism). Here the M'Naghten Rules apply, and the verdict should be one of not guilty by reason of insanity. Automatism not caused by a "disease of the mind' (sane automatism). Here the verdict is an acquittal - unless D's condition was self-inflicted, e.g. by drink or drugs, as in Lipman (1970). The question of whether D's condition is sane or insane automatism is one of law for the judge (Bratty 1963). Judges base their decision on medical evidence. However, because disease of the mind is a legal concept, judges will also take account of policy. There have been two distinct approaches: The continuing danger theory, which says that any condition likely to present a recurring danger to the public should be treated as insanity and the external cause theory, which says that conditions stemming from the psychological or emotional makeup of the accused, rather than from some external factor, should lead to a finding of insanity. ...read more.

The over-reliance on the external factor test produces bizarre abnormalities (Quick and Hennessy). It means that diabetics (sometimes), epileptics and sleepwalkers are legally, but not medically, insane. This is a huge contradiction and does not follow what is now understood in our advanced medical world. The rules currently do not distinguish between defendants who represent a public danger and those who do not. Illnesses such as diabetes and epilepsy can be controlled by medication such that sufferers are less likely to have temporary aberrations of mental capacity, but the law does not recognise this. The emphasis on legality in deciding whether D knew his acts were 'wrong' is inappropriate and too narrow as there is no way to define 'wrong' as it changes in all situations. In summary the rules governing insanity as a defence in criminal law are not in a satisfactory condition as they have not changed since 1843, yet medical science and opinions have developed and allowed greater understanding of mental defects. This wide gulf of knowledge between the law and medical science has led to unsatisfactory rulings such as in Quick and Hennessy. Kate Allen ...read more.