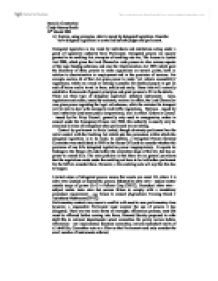 A) Explain, using examples, what is meant by delegated legislation. Describe how delegated legislation is controlled by both judges and parliament. Delegated legislation is law made by individuals and institutions acting under a grant of legislative authority from Parliament. Delegated powers are usually granted in an enabling Act, examples of enabling acts are, The Access to Justice Act 1999; which gives the Lord Chancellor wide powers to alter various aspects of the legal funding schemes; and also the Discrimination Act 1995 which gave the Secretary of State powers to make regulations on several points, both in relation to discrimination in employment and in the provision of services. For example section 46 of that Act gives power to make 'rail vehicle accessibility' regulations, which are aimed at making it possible for disabled people to get on and off trains and to travel in them, safely and easily. ...read more.

In addition, a Delegated Powers Scrutiny Committee was established in 1993 in the House Of Lords to consider whether the provision of any bills delegated legislative power inappropriately. It reports its findings to the House of Lords before the committee stage of the bill, but has no power to amend bills. The main problem is that there are no general provisions that the regulations made under the enabling act have to be laid before parliament for the MPs to consider them. However, a few enabling acts will say that this has to happen. Limited nature of delegated powers means that courts can annul DL where it is ultra vires (outside or beyond the power). Substantive ultra vires - subject matter outside scope of power (A-G v Fulham Corp [1921]). ...read more.

Reason for and against delegated legislation; it saves parliamentary time, it deals with complex and technical issues for example health and safety regulations. It is quicker and easier to amend and update than primary legislation. It makes it possible to respond quickly to emergencies. It allows for local variation to meet local need. DL results from transferring law-making powers from the legislature to the executive therefore delegated powers must be subject to effective checks and controls to ensure accountability and prevent misuse. Positive affirmation - instrument only comes into force after approval by positive resolution in Parliament Negative affirmation - instrument comes into force unless annulled by a negative resolution in Parliament Negative more common BUT reliance on this may mean draft instruments receive inadequate policy scrutiny DL inevitable and beneficial, Executive law-making needs effective checks and controls, present controls are largely adequate and need to improve policy review of draft SIs by Parliament. Danielle Constantine Cindy Murray-Smith 13th March 2003 ...read more.