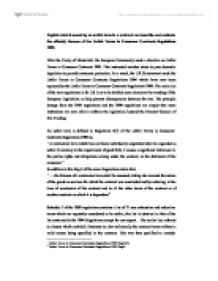 Where judgment is given for outstanding principal payable under a loan agreement and interest accrued up to the date of judgment, those claims (he accepted) are merged in the judgment. That is a conventional application of the principle of res judicata. But no claim for future interest has been the subject of adjudication by the court and such a claim cannot be barred as res judicata. The borrower's covenant to pay interest on any part of the principal loan outstanding thus survives such a judgment, and Ex p Fewings (1883) 25 Ch D 338 was wrong to lay down any contrary principle. Lord Goodhart adopted the observation of Templeman LJ in Ealing LBC v El Isaac9 Where a term is held to be unfair, the consequences is that it 'shall not be binding on the consumer' but the 'contract shall continue to bind the parties of it is capable of continuing in existence without the unfair term' Regulation 7 further states that a seller or supplier shall ensure that any written term of a contract is expressed in plain intelligible language and if there is any doubt about the meaning of a written term, the interpretation most favourable to the consumer shall succeed. The effect of a term being found to be unfair in accordance to the 1999 Regulations in set out in Reg 8(1) that, 'unfair terms in a contract are not binding on the consumer'10, thus it is the individual term that is avoidable not the contract as a whole. ...read more.

the contracting parties and took a broad approach to the issue of fairness.15 The second further change was, the Director General and the statutory qualifying bodies were given power by Regulation 13 to require disclosure of documents and information where this is necessary for enforcement purposes. It is expected that this will significantly improve the monitoring of compliance with undertakings given to drop or amend contract terms. In conclusion I would say that the effect of the Unfair Terms in Consumer Contracts Regulations 1999 on whether a term is to be deemed fair or unfair prevents an injustice on consumers who may not have strong bargaining power against larger corporations. The regulations have also given more qualifying bodies the right to take action against unfair contracts which will most likely help decrease the level of unfair terms in future contracts and greater equality for consumers. An advantage of the 1999 regulations is that they take into account the previous 1977 and 1994 regulations which mean that there is greater protection for consumers from unfair terms. The fact that the regulations are confined in their scope to consumer contract means that it is kept out of the commercial sphere where the need for certainty is greatest. So the uncertainty which the regulations will initially create is not the grave cause for concern which it would be if it applied to international contracts for the sale of goods.16 Overall the 1999 Regulations have had a significant effect on unfair terms, which will must likely result in a decrease of unfair terms being used in contracts. ...read more.