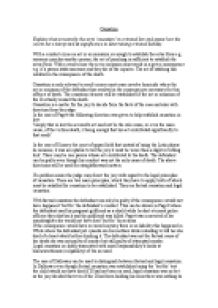 Explain what is meant by the term causation in criminal law and assess how the courts have interpreted its significance in determining criminal liability.

﻿Causation Explain what is meant by the term ?causation? in criminal law and assess how the courts have interpreted its significance in determining criminal liability. With a conduct crime an act or an omission is enough to establish the actus Reus e.g. someone punches another person; the act of punching is sufficient to establish the actus Reus. With a result crime the act or omission must result in a given consequence e.g. if a person stabs someone and they die of the injuries. The act of stabbing has resulted in the consequence of the death. Causation is only relevant to result crimes most cases involve homicide where the act or omission of the defendant has resulted in the consequences necessary for this offence of death. The causation element will be established if the act or omission of the D actually caused the death. Causation is a matter for the jury to decide from the facts of the case and also with direction from the judge. In the case of Pagett the following direction was given to help establish causation in law: 'Simply that in law the accused's act need not be the sole cause, or even the main cause, of the victims death, it being enough that his act contributed significantly to that result'. In the case of Kimsey the court of appeal held that instead of using the Latin phrase de minimis, it was acceptable to tell the jury it must be 'more than a slight or trifling link'. ...read more.

In this type of case the reasonable foresee ability test; that is, were the actions of the third party a foreseeable response to the actions of the accused in the eyes of an ordinary reasonable person. Issues of medical treatment have appeared in the following cases. The courts are very reluctant to allow medical treatment to break the chain of causation and will only do so in extreme cases. In Smith the victim dies as a result of stab wounds compounded by medical treatment that was very poor, with proper treatment the victim had a 75% chance of recovery. The appellant?s conviction of murder was upheld on the basis that ?If at the time of death the original wound is still an operating and substantial cause, then the death can properly be said to be the result of the wound, albeit that some other cause of death is also operating. Only if the second cause is so overwhelming as to make the original wound merely part of history can it be said that the death does not flow from the wound.? If the negligent treatment was the medical cause of death, the legal cause of death will still be with the accused if the original wound was still operating and substantial at the time of death. This leaves open the opportunity for the accused to escape liability if the victim dies as a result of negligent treatment so long as the original wound is healed at the time of death. ...read more.

This is taken to the extreme in the case of Dear where the victim appeared to take the chance from the D actions to commit suicide when he for no clear reason did nothing to staunch the blood flow from his cut artery. The jury convicted of murder and D?s appeal was unsuccessful as the cause of V?s death was blood loss, which was caused by stab wounds inflicted by D. There is an argument both for and against whether it is just to take liability so far. No one could have possibly foreseen that another person would react in such a way. On the other hand it was the D that inflicted the wound that led to the death so should therefore answer for that death. The main rules of causation then are that if the D?s conduct was not the factual cause of the consequence they will be not guilty however if it was and the D?s conduct was more than a minimal cause of the consequence the next question will be asked (if it wasn?t they will be found not guilty) which is did an intervening act break the chain of causation if the answer is yes then the D will be not guilty if it is No then the D legally and factually caused the consequence and will be guilty if he has the required mens rea. ...read more.