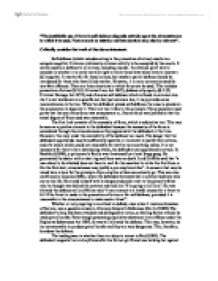 The justifiable use of force in self-defence depends entirely upon the circumstances in which it is used. Factors such as mistake and intoxication may also be relevant. Critically consider the truth of the above statement.

"The justifiable use of force in self-defence depends entirely upon the circumstances in which it is used. Factors such as mistake and intoxication may also be relevant". Critically consider the truth of the above statement. Self-defence (which includes acting in the prevention of crime) results in a compete acquittal. It allows rotationally criminal activity to be accepted by the courts. It can be used as a defence to all crimes, including murder. An obvious point here to consider is whether it is really morally right to allow those have taken lives to receive a full acquittal. It may be fair for lesser crimes, but maybe a partial defence should be introduced for those who have killed another. However, it is more commonly used for non-fatal offences. There are three situations in which force can be used. This includes prevention of crime (S.3 (1) Criminal Law Act 1967), defence of property (S.5 (2) Criminal Damage Act 1971) and of course self-defence which is found in common law. As it is not laid down in a specific act, but just common law, it may provide some inconsistencies in the law. When the defendant pleads self-defence, the onus is placed on the prosecution to disprove it. There are two limbs to this principle. The prosecution must prove that the use of any force was unnecessary or, if some force was justifiable that the actual degree of force used was reasonable. ...read more.

This case has a fair result, but it may cause problems for murder cases. It would not be justified if a defendant is convicted of nothing when killing someone just because he/she was mistaken. An important exception to this, however, is where a defendant's mistake is caused by voluntary intoxication. A drunken mistake is likely to be honest, but unreasonable. In O'Grady (1987) the defendant and his friend had been drinking heavily when they fell asleep. The defendant claimed that he awoke as his friend (the victim) began hitting him, and so hit him with an ashtray, then went back to sleep. In the morning the victim was dead and O'Grady was convicted of manslaughter. This was distinguished with Williams on the ground that it was not directly concerned with intoxicated mistakes. This may seem logical because intoxication is self-induced. However it may be difficult to consider how much alcohol makes self-defence unavailable. Also, it may be completely necessary to use force whether under the influence of alcohol or not, but of course if the defendant is he/she may not be able to rely on self-defence at all. The second limb includes the reasonableness of the force used. This may seem objective, but it is critical that for the jury to put themselves in the circumstances which the defendant supposed (whether reasonably or not) to exist. This adds a subjective element. These ideas of objectivity and subjectivity are demonstrated in Palmer (1971) ...read more.

A point that may be arisen here is that he should have been given the self-defence as he may have felt that it was the last resort. Currently, if the jury concludes that the defendant used more force than was reasonable in self-defence and death results, then he/she is guilty of murder. In Clegg (1995) the defendant was a soldier on duty at a checkpoint in the middle of nowhere, on his own. A car approched at spead with it's full headlights on, so he fired three shots throught the windscreen and another when the car had passed. This last shot hit a female passenger in the back and killed her. Forensic evidence showed that when the last shot was fired, the car would already have been ten yards away. He was convicted after the trial judge found that the lost shot could not have been fired in self-defence because once the car had passed, Clegg was no longer in danger. This may be seen as unfair because it those particular circumstances of being alone in the middle of nowhere he may have feared great danger and seemed to be only doing his job. In the House of Lords the defendant's team argued this. It may have been more appropriate to have convicted him of manslaughter, rather than murder. It was said that there is no "half way house". The House of Lords may have had the oppurtunity to introduce a partial defence of self-defence to reduce murder to manslaughter, but they did not. However this may be justified as the last shot was unecessary. ?? ?? ?? ?? ...read more.