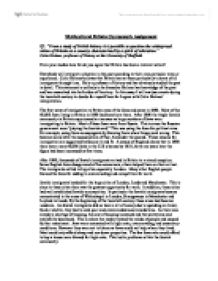 From your studies how far do you agree that Britain has been a tolerant nation? Everybody will interpret a situation in the past according to their own particular view or experience

Multicultural Britain Coursework Assignment Q2. "From a study of British history it is possible to question the widespread vision of Britain as a country characterised by a spirit of toleration." Colin Holmes, professor of History at the University of Sheffield. From your studies how far do you agree that Britain has been a tolerant nation? Everybody will interpret a situation in the past according to their own particular view or experience. Colin Holmes believes that Britain has not been particularly tolerant of all immigrants through time. He is a professor of history and has obviously studied the past in detail. This statement is unlikely to be biased as Holmes has knowledge of the past and has researched into both sides of the story. In this essay I will analyse events during the twentieth century to decide for myself how far I agree with Colin Holmes' interpretation. The first wave of immigration to Britain was of the Jews and came in 1880. Most of the 60,000 Jews living in Britain in 1880 had been born there. After 1880 the Anglo-Jewish community in Britain experienced an increase as large numbers of Jews were immigrating to Britain. Most of these Jews were from Russia. This is since the Russian government were "playing the Jewish card." This was using the Jews for political aims. For example, using them as scapegoats by blaming them when things went wrong. This became worse after the assassination of Tsar Alexander the second. These reasons for immigration are supported by Source A and B. A census of England shows that in 1880 there was a mere 60,000 Jews in the U.K whereas by 1921, forty one years later the figure had been increased by five times. After 1880, thousands of Jewish immigrants arrived in Britain to a mixed reception. Some English Jews disapproved of the newcomers; others helped them on their arrival. ...read more.

Some slogans used by MPs to gain votes were "If you want a n****r for a neighbour, Vote labour". Enoch Powell was a leading figure in using r****m to gain votes and said that immigration should stop whereas before 1960 he had encouraged Caribbean nurses to come to Britain in the labour shortage. This a important sign to show that Britain was not tolerant but was merely filling its own labour shortage. The immigration Act (1971) made immigration by black people from the Commonwealth into Britain even more difficult. This stated that if a person was born in Britain or had a parent or ancestor born in Britain they could immigrate. Most people that fell under this category were people from New Zealand and Australia who were almost all white. Other people were not allowed. The discrimination of this Act was very controversial and hotly debated in Parliament before it came law. Due to so much r****m that the government had noticed and pressure from anti-r****t organisations led to the making of the Race Relations Acts. The first Act passed in 1965 was the act made r****m in public places illegal and made "incitement to racial hatred" and offence. However the act ignored r****m in accommodation and work, which were the two main areas of concern for r****m. Also no one was in charge of enforcing the law and nobody made sure that the act worked. The result was that the Act was very limited. The Act was not effective against r****m as r****m did not decline and racists were not punished by the law. However the second Race relations Act in 1976 which was eleven years after the original a second race relations act was written. This Act made racial discrimination unlawful in employment, housing and education. However it was hard for victims to take legal action as they did not have enough money and other resources. ...read more.

In the 1962 Immigration act the government reduced the amount of immigrants. This meant that if you were black or Asian you had to have an employment voucher. I interpret this as the government trying to say that 'Britain does not need you.' This shows intolerance as Britain was merely completing its labour shortage in 1942. The act however did not apply to white minority groups such as Australians or Irish. There was an increasing in the national front numbers and MPs such as Enoch Powell tried to use this to their advantage and target immigrants. However the Race relations act reduced r****m in politics but did not affect r****m at work as this was claim and even harder to prove that an employer was r****t. This shows signs of tolerance to the immigrants but the act was not enough. The suspicion laws more commonly known as the sus laws played a big part in creating racial tension. A Black or Asian person was more likely to be stopped and searched compared to a white person. This led to race riots and the most commonly known was the Brixton riot. This shows a fight back by the Black people against the r****m and discrimination. Finally in the late nineteenth century immigration of refugees and asylum seekers was made tougher as there was more as and abuse of civil rights. One case was that of a man from India who fled and reached Britain clinging onto the landing wheels of an aeroplane. This shows desperation, however the man was refused asylum. I personally think that the man was more liable to asylum than people who could gather all the papers necessary. This is since hat if a man is willing to go to those lengths to get away from the torture then there must be some truth behind his claim. So due to all these facts I believe that Britain has not been a tolerant nation in the last century and has failed to realise who is a real immigrant and need real help and who is not. ...read more.