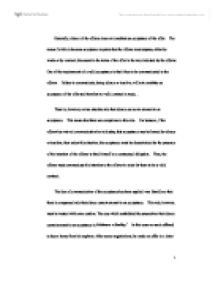 The problem arose because the auctioneer mistakenly sold the horse to someone else. The uncle then sued the auctioneer in the tort of conversion on the basis that the horse belonged to him. However, this was only so if there was a valid contract between uncle and nephew. The court held that there could not be a contract in the circumstances where the uncle imposed a contract by saying "if I hear no more about him I shall consider the horse mine".3 It was not possible for the uncle to unilaterally impose contractual liability on the nephew because of his failure to reply to the offer. As a result, there was no enforceable contract between them and thus the uncle had no claim against the auctioneer. The Judge held that it was not possible for the offeror to waive the need of communication and that silence can never constitute an acceptance. ...read more.