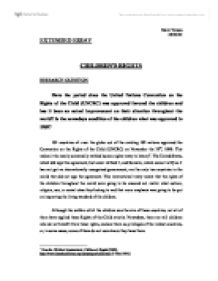 Have the period since the United Nations Convention on the Rights of the Child (UNCRC) was approved favored the children and has it been an actual improvement on their situation throughout the world?

Maite Valdes 28/02/02 EXTENDED ESSAY CHILDREN'S RIGHTS RESEARCH QUESTION Have the period since the United Nations Convention on the Rights of the Child (UNCRC) was approved favored the children and has it been an actual improvement on their situation throughout the world? Is the nowadays condition of the children what was approved in 1989? 191 countries all over the globe out of the existing 193 nations approved the Convention on the Rights of the Child (UNCRC) on November the 20th, 1989. This makes it the nearly universally ratified human rights treaty in history1. The United States, which did sign this agreement, but never ratified it; and Somalia, which cannot ratify as it has not got an internationally recognized government, are the only two countries in the world that did not sign the agreement. This international treaty meant that the rights of the children throughout the world were going to be ensured not matter what culture, religion, sex, or social class they belong to and that more emphasis was going to be put on improving the living standard of the children. Although the welfare of all the children was the aim of these countries, not all of them have applied these Rights of the Child strictly. ...read more.

Figures show that the U.S has the highest percentage of children in poverty (around 23% in 1986). - Conclusion. Has the United Nations Convention on the Rights of the Child been an actual improvement for the children and their condition in the world since 1989 until these days? The United Nations Convention on the Rights of the Child has indeed been an improvement in the situation of the children throughout the world, but there are still millions of children and people in general suffering from the consequences of war, malnutrition and lack of resources, as few examples. There still many things to be done, starting from applying the Convention on the Rights of the Child in all those countries that signed the treaty. If all of them had actually carried out these articles, children all over the world would have the basic education, sanitation, food... Governments have the possibility of changing this situation that concerns so many people with the support of their citizens. There are many campaigns that support actions in developing countries, but more could be done for the benefit for those less fortunate children and their families that have to suffer since they are very young. ...read more.