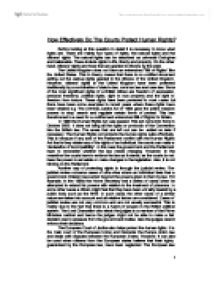 How effectively do the courts protect human rights?

How Effectively Do The Courts Protect Human Rights? Before looking at this question in detail it is necessary to know what rights are. There are mainly two types of rights, the natural rights and the citizens' rights. The natural rights can be described as universal God-given and inalienable. These include rights to life, liberty and property. On the other hand, citizens' rights are those that are granted to citizens by the state. The United Kingdom does not have an entrenched "Bill of Rights" like the United States. This in theory means that there is no codified document setting out the various rights granted to the citizens of the United Kingdom. However, citizens' rights in the United Kingdom have been protected traditionally by a combination of statute law, common law and case law. Some of the most significant rights of a British citizen are freedom of expression, personal freedoms, political rights, right to own property and the right to freedom from torture. ...read more.

In some other cases a citizen might feel that they have been unfairly treated by a public body such as the NHS. In such cases the other cases of a similar nature are taken into account and all relative factors are considered. Cases of judicial review are not very common and are not usually successful. This is mainly due to the fact that there is a fusion of powers in the British political system. The Lord Chancellor who elects the judges is a member of the Prime Ministers cabinet and hence the judges might not be able to make a fair decision due to pressure from the government bodies. Also the judges cannot enforce their decisions. The European Court of Justice also helps protect the human rights. It is the main court of the European Union and interprets the Europe Union law and deals with disputes between the European states. However, it can also be used when citizens from the European states believe that their rights, guaranteed by the European law, have been neglected. ...read more.

However, chiefly it is the government majority that is decisive and makes the final decision. The House of Lords, although limited in its powers than the Commons, is also effective to an extent in protecting the human rights. It can delay legislation for a year and any amendments it proposes must be returned to the Commons for approval. For example, the Welfare Reform Bill in 1999. The reform to the membership of Lords in 1999 has potentially strengthened its independence. However, a strong determined government can easily get its way through the supremacy of the House of Commons. Lastly, the members of Parliament can also help to protect individual rights. They may take up cases of one or a group of their constituents. They are given fast access to ministers and senior civil servants. However, the government need not act on their requests. Hence, overall I can say that the courts are effective to an extent in protecting the human rights. However, it is due to several factors that I have mentioned above, some of which are more influential than the others. 1 ...read more.