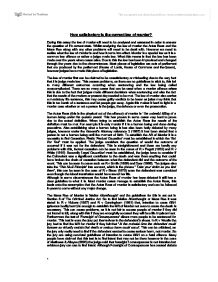 How satisfactory is the current law of murder?

How satisfactory is the current law of murder? During this essay the law of murder will need to be analysed and assessed in order to answer the question of it's current state. Whilst analysing the law of murder the Actus Reus and the Mens Rea along with any other problems will need to be dealt with. However we need to realise what the law of murder is and how it came into affect. Murder is a special law as it is a common law offence or rather a judge made law. What this means is that the law has been made over the years when cases arise. Due to this the law has been improvised and changed through the years due to the circumstances. Most pieces of legislation are acts of parliament that are produced by the parliament (House of Lords, House of Commons and the Queen), however judges have made this piece of legislation. The law of murder first can be claimed to be unsatisfactory or misleading due to the very fact that it is judge made law. This causes problems, as there are no guidelines to stick to, this led to many different outcomes occurring when sentencing and the law being called overcomplicated. ...read more.

So to find Malice Aforethought or Mens Rea it was stated in R v Vickers (1957) and R v Cunningham (1981) that, intention to cause GBH (grievous bodily harm) is enough to establish the MR of Murder not even to cause the death is necessary. This can cause problems, as it is not fair to accuse people of murder if they did not intend to kill, along with this if they are wrongfully accused they will face life imprisonment. Furthermore the test of 'Foresight of Consequences' allows more people to be sentenced for murder. This test is were the jury put themselves in the defendant's shoes. In R v Woolin the jury had to find the MR for murder if they felt that "At the material time the defendant could foresee as virtually certain that death or serious harm could occur". This can be criticised, as the jury only really need to find if the defendant wanted to cause serious harm, not murder. So the jury are using non-fatal guidelines of intention to cause GBH on a fatal offence. Many people have claimed that this test is to find intent that may not be there however in the case of Matthews & Alleyne (2003) ...read more.

The new proposals can be said is a step towards improvement as now the jury and judge have more options when sentencing. This makes it fairer as juries can now give more guilty verdicts without thinking that the sentence is too harsh and letting them off. However it will be hard to find defendants for first degree murder as the requirement is that they have the intention to kill. Along with this, critics have claimed second degree murder is a ticket to getting a lighter sentence, as the defendant needs to claim they were reckless. In retaliation the Commission said, "Taking a risk even a high risk of killing someone is recklessness and very serious but it is not the same as the deliberate taking of a life." The law of Murder has flaws in it however it is also quite good. The Actus Reus of Murder is fine and could be left to use without reform, as there are not many problems. However regarding the Mens Rea there is constant debate, and it needs to be reformed. As Jeremy Horder said, "the judiciary need to adapt to the 21st century," this could be done if the proposals of the law commission are adopted. The law has been around for over 50 years and will need reform to make it easier to use in the future. ?? ?? ?? ?? 1 ...read more.

Some good points made, especially on the proposed reforms. Some of the points about the the present law could be more accurately described.
Rating ***