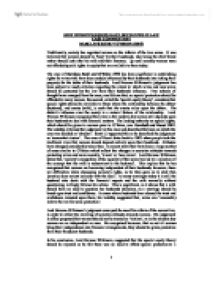 HOW WOMEN'S RIGHTS HAVE DEVELOPED IN LAW CASE COMMENTARY BARCLAYS BANK V O'BRIEN (1994) Traditionally, society has regarded women as the inferior of the two sexes. It was believed that women should be 'kept' by their husbands, who being the chief bread maker should look after his wife and their finances. Up until recently women were not afforded special rights in equity that are available to them today. The case of Barclays Bank and O'Brien 1994 has been significant in establishing rights for wives who have been unduly influenced by their husbands into risking their property for the debts of their husbands. Lord Browne-Wilkinson's judgement has been subject to much criticism regarding the extent to which wives and near-wives should be protected by the law from their husbands influence. Two schools of thought have emerged from the case; one follows that, no special protection should be afforded to marry women, the second, called the 'special equity theory', considers that special rights should be available to those where the relationship between the debtor (husband), and surety (wife), is such that the surety relies upon the debtor. ...read more.

Therefore, the creditor should take measure to satisfy himself, that the surety has been 'properly obtained'. If the creditor fails to do so he has constructive notice of the wife's rights, and so in equity, the wife can set aside the transaction and her obligations will be un-enforceable. Lord Browne-Wilkinson stated that in order to avoid having constructive notice of the wife's rights, the creditor should advise her to seek independent legal advice. It should also be ensured that the wife understands the risks involved by attending a 'private meeting (in the absence of the husband)'. This suggestion was disputed by Mr Jarvis for the bank, as he stated that it would impose 'too heavy a burden' upon lendors. However this was rejected by his lordship as he held that wives still rely implicitly upon their husbands and recognised that written warnings are 'often not read' and may be intercepted by husbands. Creditors should therefore take measures to ensure that the wife is aware of the potential liability. He regarded this as 'good practice' and not too heavy a burden upon financial institutions. Lord Browne-Wilkinson's judgement also established the need to extend protection to cases where there is an 'emotional relationship between cohabitees'. ...read more.

Although through various studies it is apparent that lending practice is far from the duty imposed in O'Brien to hold personal interviews, most lendors do ensure that a wife enters into a transaction with 'real consent'. To some extent, creditors have adhered to the principles in O'Brien however problems arise where Lord Browne-Wilkinson has failed to define 'reasonable steps'. This leads it open to judgement and causes uncertainty, as there is no specific guideline, and can therefore be disputed in a court of law. Another major failing of His Lordships judgement was recognised by Maggie Conway in her text 'Equity's Darling'. In a survey she discovered that even with 'knowledge of the risks' involved and legal advice partners would find it 'refusal' to 'act as security to their spouse or partner' impossible. The Law unfortunately does not account for emotional black mail which women may be subjected to by their husbands or partners. In retrospect, the case of Barclays Bank and O'Brien and Lord Browne-Wilkinson's' judgement has excelled women's rights significantly compared with those which were available to them prior to the hearing of the case. Although there are various discrepancies between the ideals suggested by His Lordship and actual practice, there has been much appraisal for it in developing women's collective legal rights. ...read more.