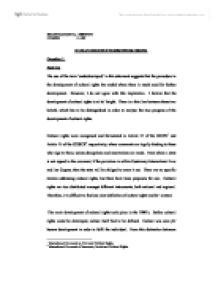 There have been many positive steps towards the development of cultural rights, enough to have state reports questioning and analysing its' effectiveness. However, not all steps have been fulfilled sufficiently enough for example, a more precise definition of culture is required which is given a more substantial meaning. In order to proceed to steps furthering the development of cultural rights, without fulfilling the previous ones gives the impression of being underdeveloped, although upholding the view that the development is still in progress. Part (b): When cultural rights began to be a concern there were fears and therefore, reservations as to its' legality. It was thought that the recognition of the right to cultural identity particularly for minorities and indigenous peoples might threaten national unity by creating segregation. This is clearly seen in the first introduction of cultural rights in the Charter of United Nations being blocked and for the same reason cultural rights were not mentioned in the Universal Declaration of Human Rights. Therefore, in Article 15 paragraph 1 of the ICESCR, the concept of cultural rights excluded the identification of cultural life being 'for the community'. Further, the term 'freedom' within paragraph 3 regarding cultural rights was restricted so as to give the state the right to impose limits for national security, public order and morality. Apart form the International Bill of Rights, other important provisions have been made by the United Nations Human Rights instruments regarding cultural rights. These include the Convention on the Elimination of All Forms of Discrimination Against Women (1979) and the Convention on the Rights of the Child. ...read more.

State reports are however, a good means by which the implementation and legality of cultural rights can be furthered once such difficulties have been overcome. 1 International Covenant on Civil and Political Rights. 2 International Covenant of Economic, Social and Cultural Rights. 3 1988-97 4 Report of the World Commission on Culture and Development (1996) 5 United Nations Economic, Social and Cultural Operation. 6 1998 7 Declaration of the Principles of International Cultural Co-operation (1966) under Article 3 "International cultural co-operation shall cover all aspects of [...] culture." And Article 4 provides "everyone to have access to knowledge [...] to contribute to the enrichment of cultural life. 8 Copenhagen 1995 9 10th December 1948 adopted by the General Assembly 10 Article 13 of the American Declaration of the Rights and Duties of Man of 1948. 11 Under Article 2 and 20 of the European Convention of Human Rights. 12 Under the Council of Europe 13 For example, Article 29 of the Indian constitution deals specifically with cultural rights. 14 For example, Article 20 of the Romanian Constitution 91991) 15 Presently recognised as a fundamental human right within the International Convention on the Rights of the Child, under Article 29. 16 Recommendation on Participation by the people at Large in Cultural Life (1976) 17 Convention Against Discrimination in Education, which came into force in 1962. 18 Universal Copyright Convention of 1952, as revised in 1971. 19 The Major Programme on Communication, Information and Informatics (1998-1999). 20 UNESCO adopted the Recommendation on the Status of Scientific Researchers (1974). 21 Convention for the Protection of Cultural Property in the Event of Armed Conflict (1954). 22 UNESCO adopted The Declaration of the Principles of International Co-operation (1966). 23 Article 27 of the ICCPR. ...read more.