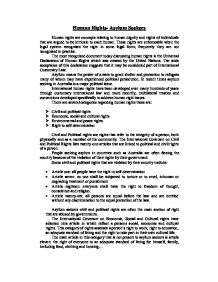 Human Rights- Asylum Seekers Human rights are concepts relating to human dignity and rights of individuals that are argued to be intrinsic to each human. These rights are enforceable when the legal system recognises the right in some legal form; frequently they are not recognised in practise. The most recognised document today discussing human rights is the Universal Declaration of Human Rights which was created by the United Nations. The wide acceptance of this declaration suggests that it may be considered part of International Customary Law. Asylum means the power of a state to grant shelter and protection to refugees many of whom may have experienced political persecution. In recent times asylum seeking in Australia is a major political issue. International human rights have been developed over many hundreds of years through customary international law and more recently, multilateral treaties and conventions developed specifically to address human right issues. There are several categories regarding human rights these are: > Civil and political rights > Economic, social and cultural rights > Environmental and peace rights > Right to self determination Civil and Political rights are rights that refer to the integrity of a person, both physically and as a member of the community. The International Covenant on Civil and Political Rights lists twenty-one articles that are linked to political and civil rights of a person. ...read more.

In Australia, the refugee and humanitarian program is linked by an off-shore and an on-shore component. 10,000 places are allocated to off-shore applicants who are waiting each year to be accepted as humanitarian entrants, while on-shore asylum seekers flee by whatever means available directly to Australia where on 2,000 places are on offer for applicants. Those asylum seekers who arrive in Australia with documentation are placed in detention centres ranging from three months to sometimes six years while they wait for their asylum to be decided and a Permeant Protection Visa (PPV) is granted. Australia provides protection for asylum seekers who meet the United Nations definition of a refugee, which is defined in the 1951 Convention and 1967 protocol relating to the status of refugees. In the United Nations Declaration of Human Rights, the UN proposed that "everyone has the right to seek and to enjoy in other countries asylum from persecution." In this article the UN was attempting to set a standard of rights for the treatment of refugees. Australia initially responded to this proposal by the UN by becoming a party to the Convention Relating to the Status of Refugees in 1951 and by forming the Migration Act 1953(Migration Act 1953)<-------- (AT OUR SKOOL WE HAVE TO LIST THE ACTS IN ITALICS OR WE LOOSE MARKS). ...read more.

These statistics illustrate just how effective this Tribunal is, it demonstrates the number of successful cases that they have reviewed. The amendment to the Migration legislation came into practice on the 1st October 2001 to clarify the application in Australia of the UN Convention Relating to the Status of Refugees. The amendments were also aimed at strengthening powers to protect asylum processes against an increasing incidence of fraud in the presentation of claims. The legislation also: * Prevents people basing their applications on conduct in Australia designed purely to strengthen their claims * Clarifies circumstances in which people will not receive protection because of their serious criminal conduct * Provides increased powers to draw adverse inferences if a person fails to provide information on oath or affirmation or cannot provide reasonable explanation for the absence of any identity documents * Prevents people whose protection visas have been cancelled, or who have previously applied as family members and been refused, from making another protection visa application. There are many services run by the Government that are set up to assist asylum seekers. Some of these include: - Financial assistance to eligible Protection Visa applicants who are unable to meet their basic needs for food, accommodation and health care while their application is being processed. - Help in preparing and lodging Protection Visa applicants through the Immigration Advice and Application Assistance Scheme. ...read more.