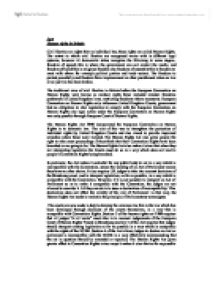 The High Court, the Court of Appeal and the House of Lords may clearly state that legislation and delegated legislation is seen as in breach of the ECHR. It is then for parliament to decide whether or not the particular law should be altered. The Courts cannot strike down an Act but may tell the government and parliament where there are problems. The judiciary has a lot of power in determining the impact and success of the Human Rights Act 1998. The Convention Rights are very loosely drafted and through their interpretation the Judges could easily dilute them and render them ineffective. The government acknowledges the central role of Judges in success or failure of the Act. It spent millions training Judges, Magistrates and Tribunal Chairpersons ready for implementation of the Act. The Human Rights Act presents an important advance for civil liberties in the United Kingdom; however there still are limitations on the impact that the Act will have. This includes legislation which is incompatible with the convention is still valid. Judges do not have the power to strike down offending statutes as unconstitutional, thus the principle of parliamentary sovereignty remains intact. When a Higher Court finds that legislation is incompatible with the Convention, then it can choose to make a declaration to this effect (Art.4) and a Minister can subsequently amend the offending legislation by a fast-track procedure which avoids the full parliamentary process. ...read more.

Courts may make declaration of incompatibility but parliament is still not obliged to make changes to legislation. Legal action for breach of ECHR is now possible in the UK Courts and Courts might award damages. When looking at the advantages and disadvantages of the Human Rights Act 1998 a well known case illustrates some of the problems with such Rights being granted to individuals. In May 2006 the treatment of nine Afghan men caused controversy. These men had hijacked a plane to flee from the Taliban the courts decision was widely condemned by tabloid newspapers; it was ruled by an Immigration Tribunal under the Human Rights Act, that the hijackers could remain in the United Kingdom. Such cases as these go on to question if the human rights act is too lenient. This case can be seen as a criticism of the act, because the 9 Afghani men committed a dangerous offence yet still won their right to asylum. The question of whether the passengers on the hijacked plane had a right to life and the right to travel safely outweighs the defendant's right to asylum. Can other individuals such as these 9 men profit from their crimes in the future. The advantage of the human rights act is that citizens have rights that are enforceable through national courts. Individuals can clearly understand their rights and are protected by the Human Rights Act in many different areas in their lives, from the work environment to the home environment citizens have reassurance in living in a democratic society. ...read more.