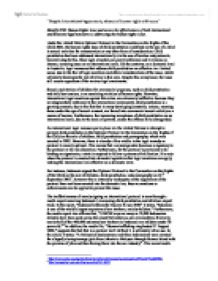 "Despite International agreements, abuses of human rights still occur" Identify ONE Human Rights issue and assess the effectiveness of both international and domestic legal measures is addressing this human rights issue. Under the United Nation Optional Protocol to the Convention on the Rights of the Child 2002, the human rights issue of child prostitution is defined as the use of a child in s****l activities for remuneration or any other form of consideration. Child prostitution has been addressed internationally via the use of treaties and protocols, however despite this, these legal remedies are poorly enforced, and it remains an intense, recurring issue on an international scale. On the contrary, on a domestic level in Australia, legal measures that address child prostitution are effective in a limited sense, due to the fear of legal sanctions and ethical considerations of the issue, which ultimately decreases the rate of crime in this area. Despite this compliance, the issue still occurs regardless of the various legal enactments. s****l exploitation of children for commercial purposes, such as child prostitution and child s*x tourism, is an escalating violation of human rights. However, international legal sanctions against this crime are extremely ineffective because they are disgracefully enforced. ...read more.

This is because of the mistaken belief that having s*x with a virgin will rid the perpetrator of HIV/AIDS. According to Science in Africa, "Encompassed in the current belief system of both prevention/cure of HIV/Aids is the notion that an intact hymen, and the smaller amount of v*****l secretions in young girls, prevents transmission of the disease through s****l intercourse... The victim is most commonly a female infant in the age range five to eighteen months, or up to two years." The increasing demand for child prostitution ultimately makes international legal measures useless to countries such as Africa, where consumer demand is elevating. Another country that has signed but not ratified the OPCROC is Australia. This means that the primary articles under international law that protect children against child prostitution is not binding under Australian law. As a result, the sanctions under the protocol such as are not enforceable which is a problem because the large bulk of human rights laws are internationally based and legally recognised through UN treaties, protocols, and conventions. Which, if signed Each State Party shall ensure that, as a minimum, the following acts and activities are fully covered under its criminal or penal law. ...read more.

Media reports such as "Australian held in Bali on child s*x charges" published 8th April 2004, in which "an Australian man working as a teacher in Bali has been arrested and accused of illegally having s*x with two teenage boys under a bridge,"5 exemplifies this. Another relevant media report is "Teacher arrested in Indonesia over child s*x," Sydney Morning Herald, August 28th 2006. An Australian had been arrested in Indonesia for allegedly abusing at least seven children and is suspected of being part of a wider pedophile ring. Such reports evidence that the legal measures put in place to end child prostitution are ineffective, as even though it may have condensed the issue it hasn't entirely ceased. In conclusion, the human rights issue of child prostitution is poorly addressed on an international level. This is due to the non-binding nature of international law. Furthermore the legal measures are optionally ratified, thus various countries in the international community have no protection of human rights in regards to the issue of child prostitution. However, in Australia, on a domestic level, the violation of child prostitution in covered by legislation. This legislation is to an extent effective. While breaches still exist, they are limited compared to the worldwide community. Also, the domestic legal measures enforce sanctions, which ultimately make the remedy effective, as there are repercussions that follow the offence. ...read more.