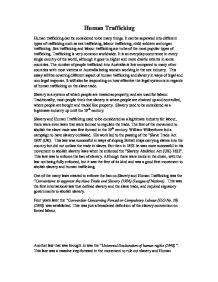 Human Trafficking Human trafficking can be considered to be many things. It can be separated into different types of trafficking such as s*x trafficking, labour trafficking, child soldiers and organ trafficking. s*x trafficking and labour trafficking are to be of the most popular types of trafficking. Trafficking is very common worldwide. It is an everyday occurrence in every single country of the world, although it goes to higher and more drastic extents in some countries. The number of people trafficked into Australia is low compared to many other countries with most victims in Australia being women working in the s*x industry. This essay will be covering different aspect of human trafficking and slavery in ways of legal and non-legal response. It will also be responding on how effective the legal system is in regards of human trafficking on the slave trade. Slavery is a system of which people are treated as property, and are used for labour. Traditionally, most people think that slavery is where people are chained up and controlled, where people are bought and traded like property. Slavery used to be considered as a legitimate industry up until the 19th century. Slavery and Human Trafficking used to be considered as a legitimate industry for labour, there were even laws that were formed to regulate the trade. The first of the movement to abolish the slave trade was first formed in the 19th century. William Wilberforce led a campaign to have slavery outlawed. His work led to the passing of the "Slave Trade Act 1807 (UK). This law was successful in ways of stoping British ships carrying slaves into the country but did not outlaw the trade in slaves. But then in 1833 he was more successful in his movement to abolish slavery laws when he enforced the "Slavery Abolition Act (UK) 1833". This law was to enforce the ban of slavery. ...read more.

Regional Organisations are intergovernmental Organisations that have a own focus on what is happening in their own region. Regions can be defined into places such as the European Union, the Western Union, and The African Union. These organisations enforce their own international laws including anti-slavery and trafficking laws. Some laws that that have come under their anti-slavery laws include- "The African Charter on Human and people's rights" This was created by the African Union and prohibits slavery and the slave trade ion member nations. The European Union came up with the European Convention on the Protection of Human Rights and Fundamental Freedoms. 45 members of state of the council of Europe were applied to this convention. It prohibits Slavery and forced labour. The Americans had their own convention on Human Rights. This convention was developed by the Organisation was developed by the Organisation of American States. Its aim is to outlaw slavery and focus of the abolishment of trafficking of women and children. Regional Organisations have been proven in ways to be more effective than international and Globally Based organisations. Regional Organisations have more influence because they are made up of nations that have strong cultural, geographical and trade links. The regional organisations have been proven to be very successful in reducing slavery. Australia has its own legislations towards Slavery and Human Trafficking. Slavery and Human Trafficking is not a major issue in Australia, but it does still happen more than people think. Not so much is it corrupt with slave labour but more so within the s*x industry with bonded labour. There have been laws enforced that are based on the protection of these breaches. Federal criminal and migration laws can be used to prosecute those who are involved in trafficking. This country is also involved in the most important international anti-slavery convention. Australia is also heavily involved ruling out slave trade and human trafficking on an international level too. ...read more.

Charities also play a big role in the fight against slavery and human trafficking. With many non-profitable charities out there, this puts up a better fight. There are many types of charities out in the world that are against slavery and trafficking. One of the most known charities is the Anti-slavery organisation. With their donations and determination they do everything in their power to end slavery and get better labour systems. These charities are also helpful in ways of educating people about slavery and keeping people alert. All of these matters to do with slavery and Trafficking have all been proven to be more than effective with the growth of knowledge and the determination to rule out these problems. The laws have been developing more and more and have grown to be much more effective as each year goes by. Although a lot has been done to try and rule out slavery, it is still happening all over the world every day. Non legal responses have been just as effective with it determination to get the message out there that slavery and trafficking is not good for people. But at an international level, the problem of people trafficking and slavery is still far from gone. The main risk of people trafficking and slavery and the difficulty in preventing it have been classed into things such as- -Limited resources or effectiveness of developing states to combat forms of exploitation and transnational crime.-Socio-political and economic factors that mark the movement of people from one place to another. In conclusion most attempts of ruling out slavery and Trafficking have been proven to be quite effective, yet not effective enough. Yes the laws that have been put in place are helping out here and there, but there is still a massive breach of human rights happening everyday all over the world. There will be many more attempts and approaches as the years go by, but for now slavery is still a massive problem and more action must be taken. ...read more.