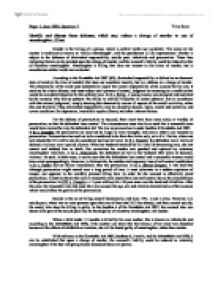 Identify and discuss those defenses, which may reduce a charge of murder to one of manslaughter.

Paper 1, June 2000, Question 7 Trina Soon Identify and discuss those defenses, which may reduce a charge of murder to one of manslaughter. (25m) Murder is the killing of a person, which is neither lawful nor accidental. The mens rea for murder is traditionally known as 'malice aforethought', and the punishment is life imprisonment. Murder is subject to the defenses of diminished responsibility, suicide pact, infanticide and provocation. These four mitigating factors can be pleaded upon the charge of murder, and the accused's liability could be reduced to that of voluntary manslaughter. Manslaughter is killing that does not amount to the crime of murder, but is nevertheless neither lawful nor accidental. According to the Homicide Act 1957 (S2), diminished responsibility is defined as an abnormal state of mind (at the time of murder) ...read more.

The circumstances must also be as such that a reasonable man would have reacted the way the defendant did. The law on provocation is under Section 3 Homicide Act 1957. In R v. Doughty, the provocative act need not be illegal or even wrongful, and even a baby's cry amounts to provocation. Provocation also need not to be considered to be from the victim only, as in R v. Davies, where not only should the D's wife's acts be considered, but also her lover. In R v. Rossiter, the defendant was a victim of domestic violence over a period of years. When her husband attacked her in a non-life threatening way, she lost control and stabbed him to death. Her conviction for murder was quashed and replaced by voluntary manslaughter. Similarly, in R v. ...read more.

However, in a suicide pact, where two or more persons agree that one of them shall kill the other(s), and then commit suicide, the one(s) who does the killing is guilty. In the Section 4 of the Homicide Act 1957, the accused who was shown to be part of the suicide pact may be found guilty of voluntary manslaughter, not murder. When a child under 12 months is killed by his own mother, this is known as infanticide and according to the Infanticide Act 1978, if the mother can show that the balance of her mind was disturbed because of the effects of childbirth or lactation, she will be found guilty of manslaughter, rather than murder. With reference to the Homicide Act 1957, Sections 2, 3 and 4, and the Infanticide Act 1978, it can be established that upon a charge of murder, the accused's liability could be reduced to voluntary manslaughter if the four mitigating factors discussed above are proven. ...read more.