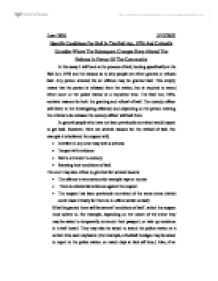 Identify Conditions For Bail In The Bail Act, 1976 And Critically Consider Where The Subsequent Changes Have Altered The Balance In Favour Of The Community

Law (MS) 5/12/2002 Identify Conditions For Bail In The Bail Act, 1976 And Critically Consider Where The Subsequent Changes Have Altered The Balance In Favour Of The Community In this essay I will look at the process of bail, looking specifically at the Bail Act, 1976 and the reasons as to why people are either granted or refused bail. Any person arrested for an offence may be granted bail. This simply means that the person is released from the station, but is required to attend either court or the police station at a requested time. The Bail Act, 1976, contains reasons for both the granting and refusal of bail. ...read more.

If bail is granted there will be several 'conditions of bail', which the suspect must adhere to. For example, depending on the nature of the crime they may be asked to temporarily surrender their passport, or take up residence in a bail hostel. They may also be asked to attend the police station at a certain time each day/week. (For example, a football hooligan may be asked to report to the police station on match days at kick-off time.) Also, if an offence is quite serious, for example fraud, a 'surety' may be expected before bail is granted. (Sureties are sums of money 'put up' to guarantee the suspect will meet his/her bail conditions.) ...read more.

It also means that the courts cannot grant bail to anyone accused of murder/attempted murder/ manslaughter/rape or attempted rape if they have already been conviction of such an offence. However, The Bail Amendment Act was not passed until 1993. This now provides the prosecution with the right to appeal against a suspect being granted bail if the offence carries a maximum sentence of over five imprisonment, if they objected to bail in the first place or if they make a verbal notice immediately of the intention to appeal followed by written notification within two hours. The process of bail is definitely being directed to the needs of the community because more and more people are being denied bail even though when their cases come to trial a significant number of them, are given custodial sentences. Si�n Lees ...read more.