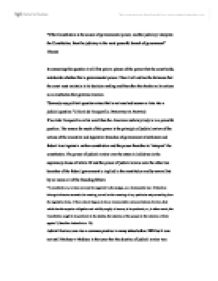 "If the Constitution is the source of governmental power, and the judiciary interprets the Constitution, then the judiciary is the most powerful branch of government" Discuss In answering this question I will first paint a picture of the power that the court holds, and decide whether this is governmental power. Then I will outline the balances that the court must maintain in its decision making and therefore the checks on its actions as an institution that governs America. "Scarcely any political question arises that is not resolved sooner or later into a judicial question." (Alexis de Tocqueville Democracy in America) If we take Tocqueville on his word then the American Judiciary truly is in a powerful position. The reason for much of this power is the principle of judicial review of the actions of the executive and legislative branches of government at both state and federal level against a written constitution and the power therefore to 'interpret' the constitution. The power of judicial review over the states is laid down in the supremacy clause of article III and the power of judicial review over the other two branches of the federal government is implied in the constitution and by several but by no means all of the founding fathers: "A constitution is, in fact, and must be regarded by the judges, as a fundamental law. It therefore belongs to them to ascertain its meaning, as well as the meaning of any particular act proceeding from the legislative body. If there should happen to be an irreconcilable variance between the two, that which has the superior obligation and validity ought, of course, to be preferred; or, in other words, the Constitution ought to be preferred to the statute, the intention of the people to the intention of their agents." (Hamilton federalist no. 78) Judicial Review was also a common practice in many states before 1803 but it was not until Marbury v Madison in that year that the doctrine of judicial review was established in constitutional convention. ...read more.

Their basis is sometimes found in the constitution but is often found in the courts interpretation of Acts of Congress. As an example Gates v Collier, 349 (1972) in which the court set out a remedy based on the 1964 Civil Rights act that obliged San Francisco Schools to teach English to Chinese students unable to speak it. In effect then the Supreme Court, through its remedies, decides what acts of Congress actually mean in practice - no small ability. This and all the other actions of the court that make it so powerful are of course subject to checks which will be explored later. The power of the court as explored through Roe was never used as much as by Chief Justice Earl Warren. His period in office provides the ultimate example of the Judiciary exerting power to govern. This period of Supreme Court history is noted as one of flagrant Judicial Activism - In Brown the court stepped ahead of public opinion in creating (if not initially being able to enforce policy) over desegregation. In Gideon v. Wainright (1963) the court provided for all citizens to have access to a lawyer if they cannot afford one,, and in Engle v Vitale (1962) school prayer was ruled to be unconstitutional. All these decisions represent important areas of public policy made by the court. We have established that no matter how hard the nice Justices look at the text of the constitution the answer to the constitutionality of a particular act or action the answer to most constitutional questions is not "awaiting discovery by the discerning" (Stone in his Dissent in US v Butler). Rather a series of factors affect the Dworkian moral decisions the court makes. It is in these factors that we find the most important checks and limits on the decisions of the court and the power that the Judiciary has to govern America. ...read more.

In his 'Court packing' legislation he proposed an increase in the number Supreme Court Justices to nineteen. He would have been able to appoint all the new Justices subject to Senatorial approval. The bill played a part in the turnaround of the court on New Deal issues although it never became an act. Such congressional stunts need popular backing and could only be used very rarely where the court is wildly out of step with public and therefore congressional thinking. The Supreme Court not only judges on constitutional issues, but as I have mentioned, interprets Federal Laws. This leaves another avenue open for congress to override a Supreme Court decision on one of its acts. It may amend the act or repass it so as to make it more palatable either in content or in wording. The additional affect of such an act is to reapply congressional and therefore democratic weight behind an act in an attempt to alter the decision of a subsequent Court. The possibility also exists for the abolition of the Supreme Court. This is barely even worth considering as the tortuous constitutional amendment process would undoutedly lead to the rejection of such a scheme. The post decision checks I have described are "often blunt instruments that might not achieve their proponents aims" (Wilson American Government p308 5th edition 2000). Combined with the predecision informal restraints that the court finds itself in they do however form a framework for Supreme Court action. There are certain decisions that are not the field of the judiciary, the court can only step so far outside the views of public moral consensus opinion and only for so long, the court has to act within the constitution itself. But the court so described is still one with enormous scope to govern on an enormous range of Issues. In no other democracy does a court hold so much political power and in particular power over public policy decisions. ...read more.