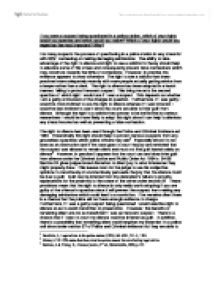 If you were a suspect being questioned in a police station, which of your rights would you exercise and which would you waive? Which of your rights would you regard as the most important? Why? For many suspects the process of questioning in a police station is very stressful with 60%1 confessing or making damaging admissions. The ability to take advantage of the right to silence and right to see a solicitor in theory should help to alleviate some of this stress and consequently prevent false confessions which may constitute towards the 60% of confessions. However, in practise the evidence appears to show otherwise. The right to see a solicitor has been practised more adequately recently with more people actually getting advice from a lawyer rather than a clerk. The right to silence has been adopted in a harsh manner, failing to protect innocent suspect. This bring me onto the second question of which right I would use if I was a suspect. This depends on whether I am a guilty or innocent of the charges in question. Furthermore, if I was guilty I would be more inclined to use the right to silence whereas if I was innocent I would be less inclined to use it since the courts are able to infer guilt from silence. ...read more.

Lengthy detention, particularly overnight, is the most feared consequence of arrest for most suspects4. Furthermore, it could lead to false confessions in order to avoid a lengthy stay. For these reasons if I was an innocent victim I would not use my right to silence but instead cooperate since the risks are too much. Although it is indisputable that the right of silence is an important right which should be retained in order not breech the European Convention of Human Rights, it is not the most important right. Its existence hinders extensive and effective interviewing since they are unable to obtain any answers from one who remains silent5. As previously explained it also benefits more experienced criminals who may be guilty, rather than vulnerable innocent ones. There are now also proper safeguards in the form of tape recording making the need for the right to silence less. A more important right is that of access to a solicitor. This right is one which would be beneficial whether I am guilty or innocent of the crime that I am suspected of. Under section 58 of Police and Criminal Evidence Act a solicitor Is supposed to make sure police stick to the rules, give legal advice and make sure due process is adhered too. ...read more.

Furthermore, this makes it even more guaranteed that he will receive a lawyer. In conclusion, rights are very important to suspects since the questioning process can be very stressful and can lead to them sometimes even believing that they are actually guilty8. The right of silence is not as important as the right to a solicitor. Although the right to silence "lies at the heart" of Article 6 (the right to a fair trial) of the European Convention of Human Rights, it is not an absolute right9 and could be retracted. Unfortunately the right of silence can not be adopted without the inevitable consequence of the court being able to infer guilt upon the individual in question. For this reason it is not the most important right and would not be advisable for an individual to use. Nevertheless, if the suspect is guilty of the crime in question he may be able to take advantage of this provision to stop himself from making any damaging admissions. Furthermore, this further adds weight to the argument that the right of access to a solicitor is more important than the right to silence. The right to a solicitor is more likely to help a defendant since it is highly probable that a qualified solicitor will be obtained which would help to prevent any false confessions. ...read more.