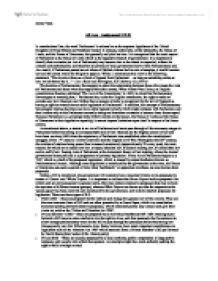 In constitutional law, the word 'Parliament' is referred to as the supreme legislature of the United Kingdom of Great Britain and Northern Ireland.

AS Law - Assignment 3 (2:3) In constitutional law, the word 'Parliament' is referred to as the supreme legislature of the United Kingdom of Great Britain and Northern Ireland. It consists, technically, of the Monarchy, the House of Lords, and the House of Commons, but generally only the last two. It is recognized that the main aspect of Parliament is the House of Lords which is the legislative branch of government. It is important to identify that no statute (an Act of Parliament) may become law or be altered or repealed, without its consent and authorisation, and therefore all powers of local government derive from Parliamentary acts. As a result, if Parliament passed an act where all British citizens had to own a hosepipe, it would become law and the courts would be obliged to apply it. Willes J. summarises this view in the following statement, "We do not sit here as a Court of Appeal from Parliament ...as long as something exists as law, we are bound by it..." - Lee v Bude and Torrington JCT. Railway Co. (1871) The doctrine of Parliamentary Sovereignty is about the relationship between those who create the Acts (of Parliament) and those who must apply them (the courts). When Albert Venn Dicey, an English constitutional theorist, published 'The Law of the Constitution' in 1885, he identified Parliamentary Sovereignty as meaning that, " Parliament has, under the English constitution, the right to make or unmake any law whatever; and further that no person or body is recognized by the law of England as having a right to override or set aside legislation of Parliament". ...read more.

Before the 'Parliament Act of 1911-1949', legislation could not be passed without the agreement of both houses, which meant that the unelected House of Lords could block legislation put forward by the elected House of Commons. However, these acts lay down special procedures by which proposed legislation can be submitted for Royal Assent without the approval of the House of Lords after specified periods of time. Nevertheless, these procedures are almost never used, as the House of Lords usually drops objections that are resisted by the Commons. It is important to explain that public opinion can have an extensive influence on Parliament, because although the vast majority of authority and power within the English legal system lies with the House of Lords, Commons and the reigning monarch, the public also has the ability to influence what laws are passed. This is because European Community Law takes precedent over English law, and enables the public to have a decisive contribution. This may involve the use of protest, such as the Coal Miners strike in 1984, where unlimited numbers of official union members picketed mines which led to threatened and implied violence against anyone willing to ignore the 'picket line'. These protests were also carried out against other businesses not directly involved or affiliated to the coal industry to gain support for their wage and employment demands. In addition, laws were passed under the Thatcher government to outlaw excessive and sympathetic picketing against businesses not directly involved with the dispute. ...read more.

However, if one of the 'rights' is violated by an Act of Parliament the courts may refuse to apply it, and consequently all new legislation must declare itself compatible with the Act. The effect of this is that when Acts of Parliament are ruled to be incompatible with Convention of Human Rights, the latter will prevail. In conclusion, I am in partial agreement with the statement, "An Act of Parliament can do no wrong, though it may do several things that look pretty odd" - Holt CJ 1702, because any act of Parliament is part of law. However, an act can be reviewed and revised in light of the application of the law in court cases. The law can not obviously be related to situations or circumstances not known at the time the act is passed. For example, the 'Theft Act 1968' was devised in accordance with known conditions and circumstances at the time, but because social behaviour's change or new one's evolve over a period of time, the original act did not include reference to a recent anti-social phenomenon known as 'joy-riding'. Therefore, the act was required to be reviewed and updated to reflect this. An offence under s1 of the Theft Act states that anyone who 'dishonestly appropriates property belonging to another with intention of permanently depriving the other of it' is guilty of theft. In R v Gomez (1993), it was decided that this included situations where the owner of the property handed it over to the thief because of deception. James Yates ...read more.