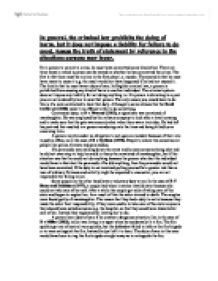 In general, the criminal law prohibits the doing of harm, but it does not impose a liability for failure to do good. Assess the truth of statement by reference to the situations persons may incur.

In general, the criminal law prohibits the doing of harm, but it does not impose a liability for failure to do good. Assess the truth of statement by reference to the situations persons may incur. For a person to commit a crime, he must have committed some kind of act. There are three ways in which a person can be tested on whether he has committed the crime. The first is that there must be a crime in the first place i.e. murder. The second is that he must have meant to cause it e.g. the result would not have happened if he had not caused it. The third is that he must have a duty of care. In English criminal law, a person is prohibited from causing any kind of harm to another individual. ...read more.

People to whom this concerns are people like police, firemen and paramedics. If a paramedic was walking down the street and he seen someone being shot and he did not even stop to help he could in theory be convicted of manslaughter, but if the situation was that he could not do anything because the person who shot the individual would have in fact shot the paramedic if he did anything, then the paramedic would not have been convicted. If the duty to act involved putting yourself at a greater risk than a man of ordinary firmness and activity might be expected to encounter, you are not responsible for failing to act. Some people on the other hand have a voluntary duty to act. In the case of R V Stone and Dobinson (1977), a couple had taken in stones invalid sister because she could not take care of her self. ...read more.

The fire quickly got out of control very quickly, but the defendant failed to inform the fire brigade or to even extinguish the fire. Instead he just left it to burn. The duty of care in this case would have been to ring the fire brigade straight away as to extinguish the fire. A doctor is under a duty to care for a patient unless the patient refuses medical treatment. In this case the doctor has tried to help and so cannot be found guilty of any crime. If the patient is unable to give Instruction into whether he would like to refuse treatment the doctor will always act in the best interests of the patient. In the case of Airedale National Health Service trust v Bland (1993), Bland was in a vegetative state. The House of Lords decided that it was in his best interests to cease feeding him and allow him to die. ...read more.

Summary:This answer is descriptive in nature but does not address the "Assess the .." part of the question. The description of cases where a failure to comply with a duty amounts to a criminal offence is generally accurate.
Rating: *** (just)